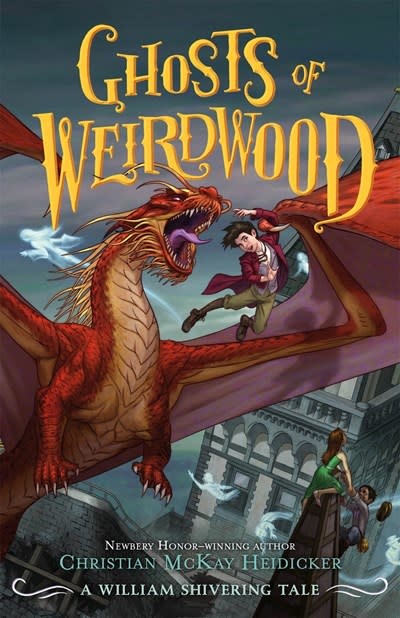 In the second Weirdwood adventure, a rift opens between the worlds of the living and dead, and it's up to a pair of thieves to save their city.

Fresh off of heroically saving their city from nightmarish monsters, twelve-year-old reformed thieves Arthur and Wally are determined to become Novitiates of the Wardens of Weirdwood—defenders of the border between the Real and Imaginary worlds.

Their mission: defeat the Order of Eldar, a shadowy group that exploits the creatures of the Fae for their own gain. When the Order opens what seems to be a Rift between the worlds of the living and the dead, they set up a menagerie of ghosts to make money off those grieving for their lost loved ones. As spirits begin to cross over into Kingsport, Arthur, Wally, and their ghost companion, Breeth, will have to return a fleet of dead souls to the other side of the Veil. Perfect for fans of Tristan Strong Punches a Hole in the Sky and Keeper of the Lost Cities.

Professor William Shivering lives in a house by the sea with three cats and a one-eyed raven named Glinda. When he's not writing true stories about fake worlds, he enjoys walking the cliffs and conversing with the moon. He's the president and founder of CASPR (Coalition for the Appreciation of Shades, Phantasms, and Revenants), a non-profit that provides assistance to disembodied peoples. Professor Shivering employs an assistant, Newbery Honor winner Christian McKay Heidicker, though he rarely if ever takes Christian's writing suggestions. Mr. Shivering is rarely cold.