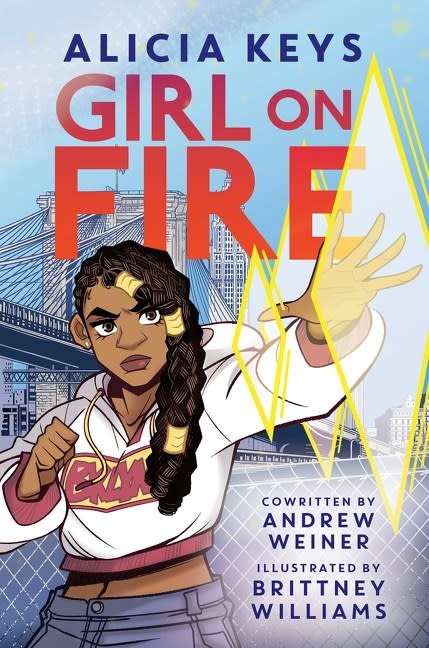 Fans of the Paper Girls and I Am Alfonso Jones will love this new full-color, jacketed hardcover graphic novel by New York Times bestselling and Grammy Award–winning artist about finding the strength within when your whole world changes in an instant.

Alicia Keys is a 15-time GRAMMY®Award-winning singer, songwriter, musician, producer, accomplished actress, New York Times best-selling author, film/television and Broadway producer, entrepreneur, and a powerful force in the world of activism. Since the release of her monumental 2001 debut album, SONGS IN A MINOR, Keys has sold over 65 million records and built an unparalleled repertoire of hits and accomplishments.Andrew Weiner is the founder and CEO of Inner Station, a multimedia entertainment company focused on the creation of comic books and graphic novels as well as the production of filmed entertainment. A graphic novelist and screenwriter, in addition co-writing/co-creating Girl on Fire, he is the author of several forthcoming graphic novels, including Daddy & The Beanstalk (Little Brown). Andrew is also a prolific filmmaker, to date having produced seven feature films. He lives in Brooklyn with his wife, two tiny kids and their giant cat, Waldo.Brittney Williams is Los Angeles based creative originally from South Carolina. Williams is a storyboard and comic book artist who draws A LOT. In 2012 she interned at Walt Disney Animation Studios as a storyboard artist. Since then, she's worked for a variety of animation studios and publishers including Netflix, Cartoon Network, Dreamworks TV, BOOM! Studios, DC Comics and Marvel Comics. As a two-time GLAAD award nominee, she exists to create things for kids and the queer community.