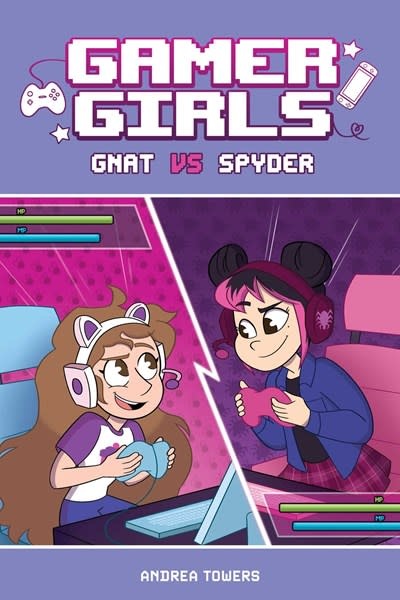 Thirteen-year-old Natalie lives a double life. By day, she’s an average eighth grader at Golden Trails Middle. At night, she’s Gnat112, a streamer for her favorite video game, Alienlord. But when the new girl moves in next door, will Natalie's double life be revealed?

Natalie has a secret. She's a gamer.

By day, Natalie is an average eighth grade student. At night, she's Gnat112! Living a double life is hard . . . and keeping a secret from your friends is even harder.

In this illustrated middle grade book (the first of an all-new series, Gamer Girls), Natalie and her three BFFs learn to navigate the gamer world together, one girl at a time. This series is a great read for gamers and gamer enthusiasts of all kinds. Plus, there's the occasional middle school drama . . . if only Natalie could battle math teachers like video game aliens!

Andrea Towers is a writer based in New York who has worked in the entertainment industry for over a decade and lived in geek spaces for a lifetime. Her book and comic work includes Geek Girls Don't Cry: Real-Life Lessons From Fictional Female Characters, Trolls: Comictivity, and Octobriana With Love. Her writing on pop culture has appeared in outlets such as Entertainment Weekly, Marvel, and Nerdist, Bustle, IGN, Variety, Mashable, The Wrap, Uproxx, and more.

Alexis Jauregui is a Peruvian-Chinese illustrator/story artist from Southern California. She has worked at places such as DreamWorks and Cartoon Network. When she isn't drawing or playing Animal Crossing or Pokémon, she is traveling around trying new foods, sipping her favorite boba, as well as listening to podcasts about fairy tales and spooky stories.