Home » Go Back to Sleep 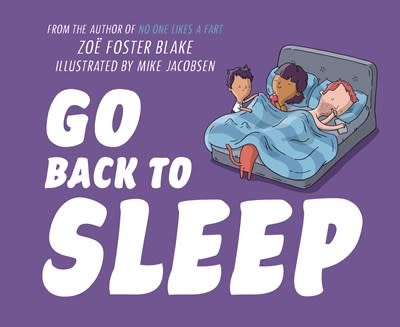 Go Back to Sleep

From the author of No One Likes a Fart comes a hilarious new picture book that turns the classic bedtime story on its head, asking the question: What happens when it’s the parents who just won’t go to sleep?

Poor Finn is looking forward to drifting off to sleep in his cozy, warm bed, when Mom appears wanting a drink. Finn resettles her and has just fallen asleep, when he’s woken again…this time by Dad, who’s had a bad dream. And so it goes. Just when Finn has one parent back to sleep, the other wakes up! When will these two sleep through the night?

“Go back to sleep!” A phrase said by parents to kids everywhere. But what happens when the roles are reversed? What if the parents need help getting back into bed? With hilarious illustrations by Mike Jacobsen and clever text by Zoë Foster Blake, Back to Sleep is the bedtime story that will have the whole family laughing.

Zoë Foster Blake is an Australian author, columnist, magazine editor, and cosmetics entrepreneur. She’s worked for over a decade in journalism, writing for titles such as Cosmopolitan, Harper’s BAZAAR, and Sunday Style, as well as being the founder of all-natural Australian skin care line, Go-To. Zoë has written four novels—Air Kisses, Playing the Field, The Younger Man, and The Wrong Girl—and a dating and relationship book, Textbook Romance, written in conjunction with Hamish Blake. Her first picture book No One Likes a Fart was the winner of “Children’s Picture Book of the Year” in the 2018 Australian Book Industry Awards. She lives in Springfield, Australia.

Mike Jacobsen had his first exhibition at the age of three, when he drew a powerfully expressive portrait on the wall above his parents' bed. His parents remarked that it left an indelible impression upon them. And the wall. He's been drawing ever since, for clients such as Disney, Apple, The Guardian, 20th Century Fox, and Lonely Planet, always adding a dash of humor whenever he can.