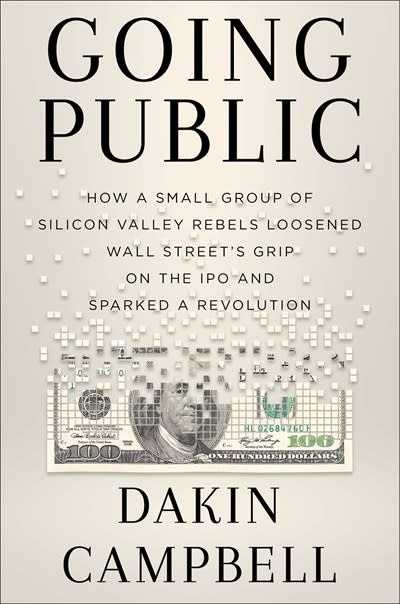 A behind-the-scenes tour of the high-stakes world of IPOs and how a visionary band of startup executives, venture capitalists, and maverick bankers has launched a crusade to upend the traditional IPO as we know it.

GOING PUBLIC is a character-driven narrative centered on the last five years of unparalleled change in how technology startups sell shares to the public. Initial public offerings, or IPOs, are typically the first time retail investors can own a piece of the New Economy companies promising to rewire economic rules. Selling IPOs is also one of the most profitable businesses for Wall Street investment banks, who have spent the last 40 years protecting their profits. In an era when algorithms and software have made the financial markets more efficient, the pricing of IPOs still relies on human judgment.

In 2016, executives at music-streaming service Spotify sought to upend the status quo. Led by a trim and understated CFO, Barry McCarthy, and a shy but brilliant founder, Daniel Ek, they took a wild idea and forged something new. GOING PUBLIC explores how they got comfortable with the risk, and how they lobbied securities watchdogs and exchange staff to rewrite the regulations. Readers will meet executives at disruptive companies like Airbnb, DoorDash, and data miner Palantir, venture capitalists, and even some bankers who seized on Spotify’s labor and used it to knock Wall Street bankers off the piles of fees they’d been stacking for so long.

GOING PUBLIC weaves in earlier attempts to rethink the IPO process, introducing readers to one of Silicon Valley’s earliest bankers, Bill Hambrecht, whose invention for selling shares online was embraced by Google founders Larry Page and Sergey Brin when they auctioned their shares in 2004. And it examines the recent boom in blank-check companies, those Wall Street insider deals that have suddenly become the hottest way to enter the public markets. GOING PUBLIC tells stories from inside the room, and more.

Dakin Campbell is the Chief Finance Correspondent at Business Insider. He is the publication’s senior reporter covering Wall Street, after a decade at Bloomberg writing for its wire service, Businessweek, and Markets magazine.