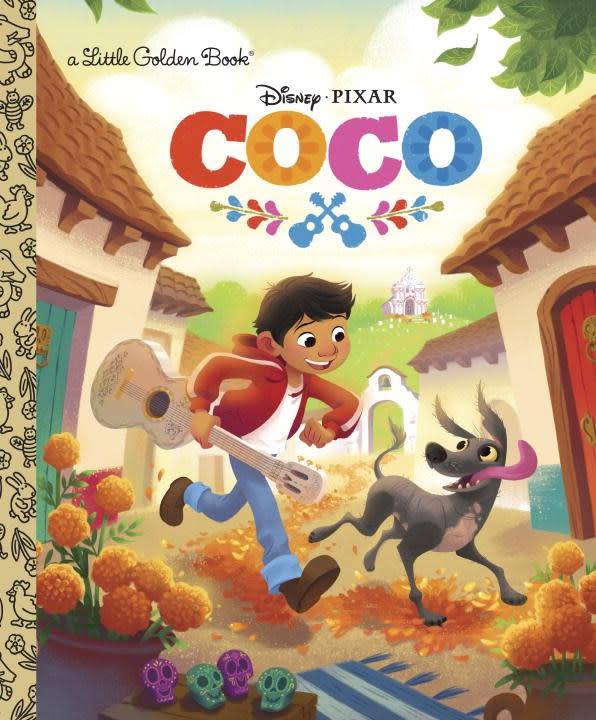 Ages 2 to 5, Grades K And Under
A beautifully illustrated Little Golden Book based on Disney/Pixar’s Coco, coming to theaters November 22, 2017!

Despite his family’s baffling generations-old ban on music, Miguel (voice of newcomer Anthony Gonzalez) dreams of becoming an accomplished musician like his idol, Ernesto de la Cruz (voice of Benjamin Bratt). Desperate to prove his talent, Miguel finds himself in the stunning and colorful Land of the Dead following a mysterious chain of events. Along the way, he meets charming trickster Hector (voice of Gael García Bernal), and together, they set off on an extraordinary journey to unlock the real story behind Miguel’s family history. Directed by Lee Unkrich (Toy Story 3), co-directed by Adrian Molina (story artist Monsters University), and produced by Darla K. Anderson (Toy Story 3), Disney/Pixar’s Coco opens in U.S. theaters on November 22, 2017. This beautifully illustrated Little Golden Book retells all the excitement and adventure of Disney/Pixar’s Coco. It’s perfect for children ages 2 to 5.

Series Overview: LITTLE GOLDEN BOOKS have been loved by children for 75 years. When they were first published in 1942, high-quality books for children hadn’t been available at a price most people could afford. Little Golden Books changed that! Priced at just 25 cents and sold where people shopped every day, they caused an instant sensation and were soon purchased by the hundreds of thousands. Created by such talented writers as Margaret Wise Brown (author of Goodnight Moon) and Richard Scarry, Little Golden Books have helped millions of children develop a lifelong love of reading. Today, Little Golden Books feature such beloved classics such as The Poky Little Puppy and Scuffy the Tugboat, hot licenses, and new original stories—the classics of tomorrow, ready to be discovered between their sturdy cardboard covers and gold-foil spines.