Home » Golden Gate Park, An A to Z Adventure 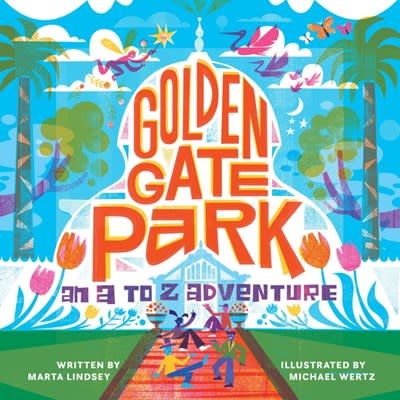 Golden Gate Park, An A to Z Adventure

Explore California’s most visited city park in this A-to-Z adventure!From A for Artist Ruth Asawa’s hanging wire creations in the de Young Museum to Z for the Zebra on the carousel in the Koret Children’s Quarter, this book leads you around San Francisco’s famous Golden Gate Park to reveal a range of fun and surprising facts for tourists and locals alike. Step into art, science, nature, and culture by visiting the park’s major attractions, like the serene Japanese Tea Garden; discovering secret destinations, like the magical fairy doors hidden in trees; or just relaxing on the green meadows where the bison roam. Included also at the back of the book is a colorfully illustrated map with extra trivia and details on the park’s favorite sights.The board book version of this is available as ABCs of Golden Gate Park.

Marta Lindsey is a writer and park lover. She lives in San Francisco with her family, just one block from Golden Gate Park. Marta's other favorite park is Point Reyes National Seashore, which inspired her first children's book.Michael Wertz is an award-winning illustrator, printmaker, and educator based in Oakland. Known for his playful and vivid imagery, he has collaborated with the de Young Musem, Oakland Museum, New York Times, Oaklandish, and more. His work can be found throughout the city-from the 60-foot mural at Oakland Animal Services to the Oakland Public Library's Fairyland-themed library card.