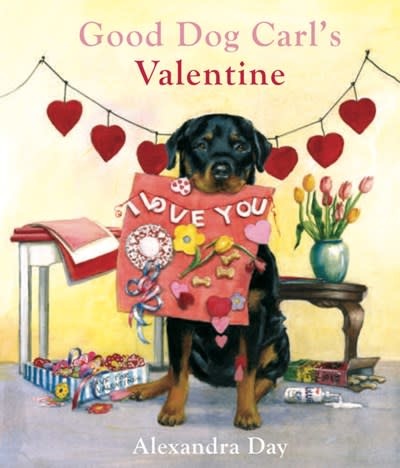 The 26th title in the beloved series. In Good Dog Carl Makes a Valentine Carl works hard to make a hand made Valentine's Day card for his family, with hilarious results.

Carl is back in Good Dog Carl's Valentine the sixteenth picture book in the beloved series about Carl, the babysitting Rottweiler.In Good Dog Carl's Valentine Carl and family are getting ready for Valentine's Day. After making a Valentine for her Mother, Madeline sits down to a well earned snack. Unbeknownst to her, or anyone else in the family, Carl gets into the home made Valentine supplies. As usual the results of Carl's secret activities are sweet, funny and this time around especially loving - appropriately enough for the Valentine's season. Begun in 1985 with the classic Good Dog Carl in each of the subsequent books, including the best seller's Carl's Christmas, Carl Goes Shopping and Carl's Afternoon in the Park, Alexandra Day's dog hero Carl always pulls of amazing feats of dexterity and good natured adventure, but he always cleans up after himself and puts everything back where it belongs. Good Dog Carl's Valentine is no exception to this model of fun and tidiness, which may go part of the way towards explaining the book series' popularity with children and parents.

Seattle resident Sandra Woodward Darling, the creator of the popular Good Dog Carl series of children's books, is better known by her pseudonym, Alexandra Day. She is loved the world over for her sumptuously illustrated series of Carl books, the first of which was Good Dog Carl, published in 1985 it tells the story of a dog named Carl who looks after a baby. Thirty plus years later 24 Carl books have been published, with over 6 million books in print. When not painting or tending her garden she visits libraries and schools with the dog to promote reading and therapy animals.