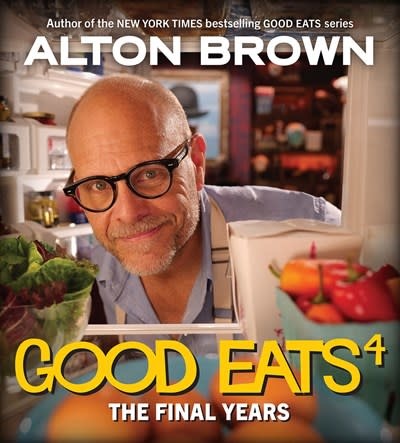 An all-new collection of must-have recipes and surprising food facts from Alton Brown, drawn from the return of the beloved Good Eats television series, including never-before aired materialThis long-anticipated fourth and final volume in the bestselling Good Eats series of cookbooks draws on two reboots of the beloved television show by the inimitable Alton Brown—Good Eats Reloaded and Good Eats: The Return. With more than 175 new and improved recipes for everything from chicken parm to bibimbap and cold brew to corn dogs, accompanied by mouthwatering original photography, The Final Years is the most sumptuous and satisfying of the Good Eats books yet.

Brown’s surefire recipes are temptation enough: the headnotes, tips, and sidebars that support them make each recipe a journey into culinary technique, flavor exploration, and edible history. Striking photography showcases finished dishes and highlights key ingredients, and handwritten notes on the pages capture Brown’s unique mix of madcap and methodical. The distinctive high-energy and information-intensive dynamic of Good Eats comes to life on every page, making this a must-have cookbook for die-hard fans and newcomers alike.

Alton Brown was directing TV commercials when he got the crazy idea to go to culinary school and reinvent the food show. The result: Good Eats, which has kept Brown gainfully employed for more than 20 years and earned him a Peabody Award. Along the way he also hosted Iron Chef America, Cutthroat Kitchen, and Feasting on Asphalt. Brown’s live culinary variety shows have played to sold-out theaters across the United States. He lives in Marietta, Georgia.