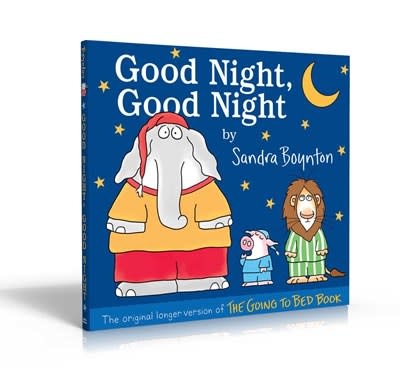 Maestro of bedtime Sandra Boynton expands her bestselling The Going to Bed Book in this deluxe collectible picture book that will help a new generation of children get ready for bed.

The sun has set not long ago.So begins one of the most widely loved children’s books ever made.

The Going to Bed Book was first published in 1982 and has been a cherished part of many millions of bedtimes ever since.

Good Night, Good Night is the larger and longer version, now redrawn by the author for a fabulous new generation. Every copy comes with a free pair of imaginary singing rabbits.