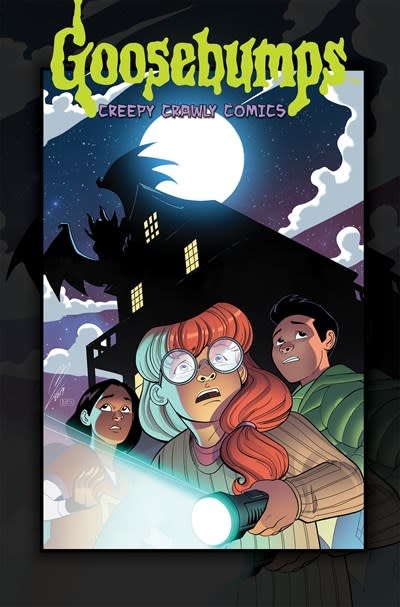 Brave the spine-tingling world of R.L. Stine to uncover the thrills and chills of the first ever Goosebumps comic series to feature original stories in this graphic novel collecting three separate tales!

Monsters At Midnight offers a new creepy carousel spin on HorrorLand! When Mia and Ginny go to stay at their Grandma’s mothball-filled house for the summer, boredom forces them to venture out into her tiny town. But, soon, what appears to be a dusty used bookstore plunges them into an upside-down world of terror!

In Download and Die, when Mitra and her two besties find a phone with the latest and greatest technology and apps, they think they are dreaming. But when push (notifications) come to shove, they might be living a nightmare! With the phone turning them against each other, can Mitra do a hard reset before it’s too late?

Finally, in Horrors of the Witch House, all the kids in Beaver Creek, Oregon, know that the old Whaley House is probably haunted, so when young tech entrepreneur Veruca Curry moves in, the kids fear that there’s more to her than meets the eye. The adults in town think that Veruca is just the sort of hip, young new blood that Beaver Creek needs, but Rosie, a loner who loves anime and Japanese comics, Carlos, a popular preppy boy, and Becca, the school’s star athlete, aren’t so sure.

Jen Vaughn is a cartoonist and narrative game designer working under the green trees and gray clouds of Seattle, Washington. She loves the age-old practice of storytelling in newer forms from creating fun game loops to writing and drawing comics. If not working on comics, you can find Jen geocaching, playing D&D and generally drinking hot liquids like coffee or tea as long as they are not haunted.

Jeremy Lambert is a writer of comics and screenplays. Originally from Bowie, Maryland, he now resides in Los Angeles. Once upon a time, he was an extras casting director for La La Land, Agents of Shield, Furious 7, True Detective, and Magic Mike, among other films and television shows. He believes there are few things in life better than a nice pair of socks.

Denton J. Tipton is a New York Times-bestselling graphic novelist and a managing editor at IDW. His credits include Transformers, G.I. Joe: Rise of Cobra, Orphan Black: Helsinki, and The X-Files. A former newspaper journalist, his literary influences include Hunter S. Thompson, Ernest Hemingway, Dashiell Hammett, and Philip K. Dick. He lives in San Diego with his wife, Merrily, and his best friend Buster.