Home » Grains for Every Season: Rethinking Our Way with Grains 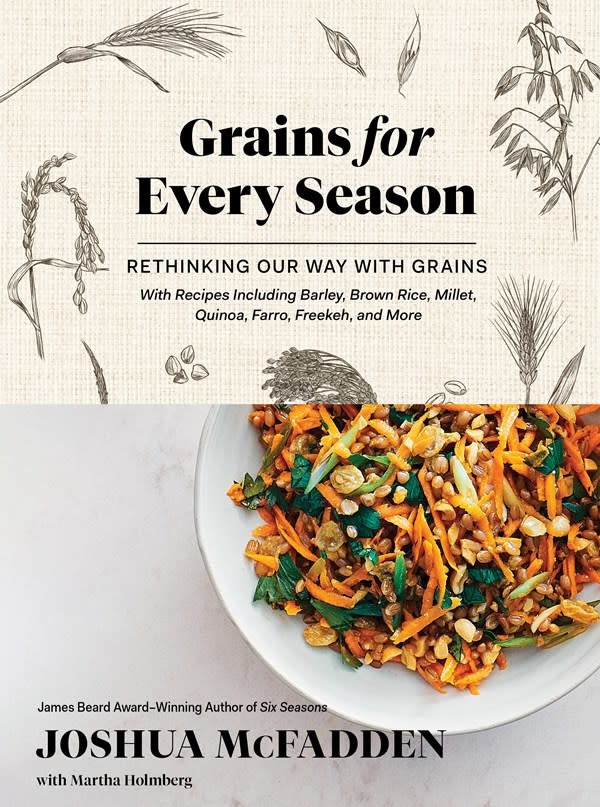 Grains for Every Season: Rethinking Our Way with Grains

James Beard Award–winning author Joshua McFadden gives grains the same considered and wide-ranging treatment he did vegetables in this much-anticipated follow-up to the mega-successful Six Seasons.

Joshua McFadden’s first book, the James Beard Award–winning and perennially bestselling Six Seasons, transformed the way we cook with vegetables. Now he’s back with a new book that applies his maximalist approach to flavor and texture to cooking with grains. These knock-your-socks-off recipes include salads, soups, pastas, pizzas, grain bowls, breads—and even desserts. McFadden works as intuitively, as surprisingly, as deliciously with whole grains as he does with vegetables. Grains for Every Season will change the way we cook with barley, brown rice, buckwheat, corn, millet, oats, quinoa, rye, wheat (bulgur, farro, freekeh, spelt, wheat berries, and whole wheat flour), and wild rice.

The book’s 200 recipes are organized into chapters by grain type, unlocking information on where each one comes from, how to prepare it, and why the author—the multi-award-winning chef/owner of Ava Gene’s in Portland—can’t live without it. McFadden uses grains both whole and milled into flour. The many gluten-free recipes are clearly designated.

McFadden reveals how each grain can be used in both savory and sweet recipes, from Meat Loaf with Barley and Mushrooms to Peanut Butter–Barley Cookies; from Buckwheat, Lime and Herb Salad to Buckwheat Cream Scones. He folds quinoa into tempura batter to give veggies extra pop and takes advantage of the nutty flavor of spelt flour for Cast-Iron Skillet Spelt Cinnamon Rolls. Four special foldout sections highlight seasonal variations on grain bowls, stir-fries, pizzas, pilafs, and more, to show how flexible and satisfying cooking with grains can be.

Joshua McFadden is the founder of Submarine Hospitality in Portland, Oregon. He owns and manages Ava Gene's, Cicoria, Medjool, and Tusk restaurants. In between running the restaurants, he is bringing new life to Berny Farm, a historic fifty-acre farm in Springdale, Oregon, with the goal of creating an agricultural complex that will host collaborations between farming, food, and design. His first book, Six Seasons: A New Way with Vegetables, also written with Martha Holmberg, won a James Beard Award in 2018. Follow him on Instagram at @jj__mc.Martha Holmberg is a food writer who co-wrote, with Joshua McFadden, Six Seasons: A New Way with Vegetables-a 2018 recipient of the James Beard Award. Holmberg studied cooking in Paris at École de Cuisine La Varenne and stayed to work as a private chef. She was the editor in chief of Fine Cooking magazine for a decade, followed by five years as the food editor of The Oregonian newspaper, in Portland, Oregon, where she lives. Holmberg has authored or coauthored nine books, including The Bar Book, with Jeffrey Morgenthaler, and her own books Puff, Crepes, Plums, and Modern Sauces. She is an avid though undisciplined tomato grower and is working on a tomato cookbook.