Home » Great or Nothing 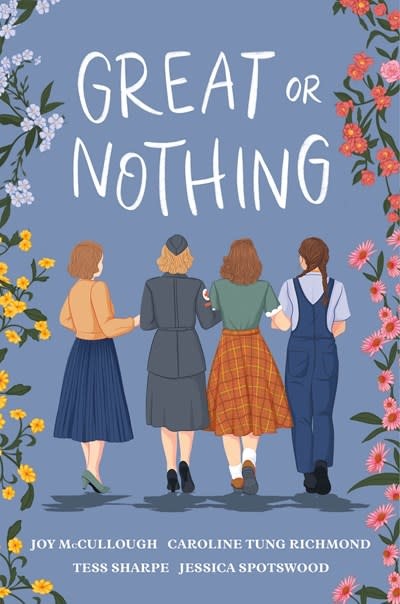 A reimagining of Little Women set in 1942, when the United States is suddenly embroiled in the second World War, this story, told from each March sister’s point of view, is one of grief, love, and self-discovery.

In the fall of 1942, the United States is still reeling from the attack on Pearl Harbor. While the US starts sending troops to the front, the March family of Concord, Massachusetts grieves their own enormous loss: the death of their daughter, Beth.

Under the strain of their grief, Beth’s remaining sisters fracture, each going their own way with Jo nursing her wounds and building planes in Connecticut, Meg holding down the home front with Marmee, and Amy living a secret life as a Red Cross volunteer in London—the same city where one Mr. Theodore Laurence is stationed as an army pilot.

Each March sister’s point of view is written by a separate author, three in prose and Beth’s in verse, still holding the family together from beyond the grave. Woven together, these threads tell a story of finding one’s way in a world undergoing catastrophic change.

Tess Sharpe lives deep in the backwoods with a pack of dogs. She is the author of many books for children, teens and adults, including the critically acclaimed YA novel Far From You and the Jurassic World prequel, The Evolution of Claire. She is also the co-editor of Toil & Trouble, a feminist anthology about witches.

Jessica Spotswood is the author of the fantasy trilogy The Cahill Witch Chronicles and the contemporary novels Wild Swans and The Last Summer of the Garrett Girls. She is the editor of A Tyranny of Petticoats and The Radical Element and co-editor of Toil & Trouble. Jess lives in Washington, DC, where she works for the DC Public Library.

Caroline Tung Richmond is the award-winning author of The Only Thing to Fear, The Darkest Hour, and Hungry Hearts. She is also the program director of We Need Diverse Books. A self-proclaimed history nerd and cookie connoisseur, Caroline lives in Maryland with her family.

Joy McCullough’s debut YA novel Blood Water Paint won honors such as the National Book Award longlist and finalist for the ALA Morris Award. Her debut MG novel, A Field Guide to Getting Lost is a JLG Selection. She writes books from her home in the Seattle area, where she lives with her husband and two children.