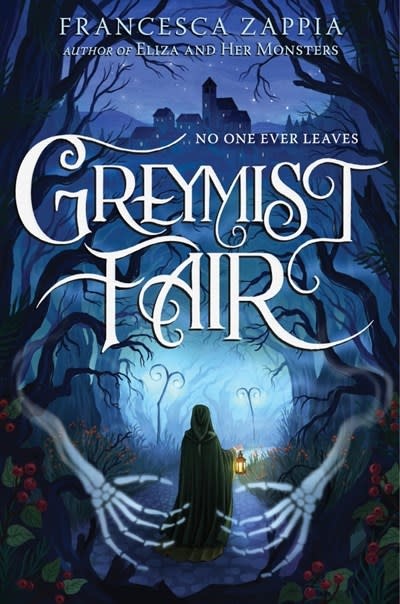 The people of Greymist Fair know that the woods are a dangerous and magical place, and that they should never set foot off the road. But when a young tailor discovers a body on the road, her search for the culprit reveals even more strange and dark happenings around her town. From acclaimed author Francesca Zappia, Greymist Fair is a suspenseful and inventive murder-mystery inspired by the lesser-known fairytales of the Brothers Grimm. Greymist Fair will bewitch readers of Rachel Vincent’s Red Wolf, Liz Braswell’s A Twisted Tale series, and fans of Into the Woods.Features chapter decorations by the author throughout, as well as a map.

Two roads lead into a dark forest. They meet at Greymist Fair, the village hidden in the trees, a place kept alive by the families that never leave. The people of Greymist Fair know the woods are a dangerous and magical place, and to set foot off the road is to invite trouble.When Heike, the village’s young tailor, discovers a body on the road, she goes looking for who is responsible. But her quest only leads to more strange happenings around Greymist Fair.Inspired by the original, bloody, lesser-known fairytales of the Brothers Grimm, acclaimed author Francesca Zappia crafts an enthralling murder-mystery that will keep readers turning the pages. Told from multiple points of view, with each narrative building on the crime discovered by Heike, Greymist Fair examines the themes of childhood fears, growing into adult responsibilities, and finding a place to call home amid the trials of life and death.

Francesca Zappia lives in central Indiana and is the author of Made You Up, Now Entering Addamsville, Katzenjammer, and the acclaimed Eliza and Her Monsters. When she is not writing, she’s drawing her characters, reading, or playing video games. Francesca Zappia also blogs about writing at www.francescazappia.com.