Home » Hans Christian Andersen: The Journey of His Life 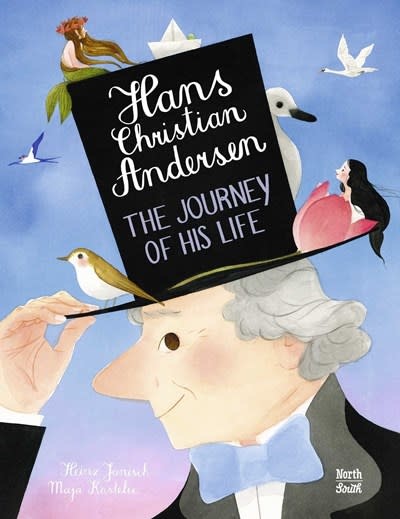 Hans Christian Andersen: The Journey of His Life

“If you like, I’ll tell you the story of a boy who learned to fly.”

Through an enchanted conversation with a young girl in a horse-drawn coach, Hans Christian Andersen shares his life’s struggles, dreams, and triumphs—whose threads can be found woven into his greatest stories. He tells her about the “fairy tale of his life” and how the son of a shoemaker became a celebrated writer.

Heinz Janisch paints a sensitive portrait of Andersen and his literary work. Maja Kastelic has developed a well-suited illustration concept for this story that combines sumptuous art of a picture book with elements of a graphic novel. Thus, for the first time, H. C. Andersen’s life and work become a fascinating collage in picture book form.

A moving, inventive story about the life of Hans Christian Andersen

Maja Kastelic was born in Slovenia, where she studied painting, philosophy and the theory of visual arts. She worked for several years as a retouching artist restoring frescos, before starting her career in children’s publishing. Maja has received a White Ravens Award and has been selected for the Bologna Illustrators Exhibition.

Heinz Janisch was born in Austria in 1960 in Güssing, Austria. and studied German literature in Vienna. He has published numerous books, including many children's titles, which have been translated into more than twelve languages. He was nominated for the 2009 Lindgren Memorial Award and has been nominated for the 2010 Hans Christian Andersen Award. In 2008 he received the Austrian Picture Book Award. Heinz Janisch lives with his family in Vienna and in Burgenland.