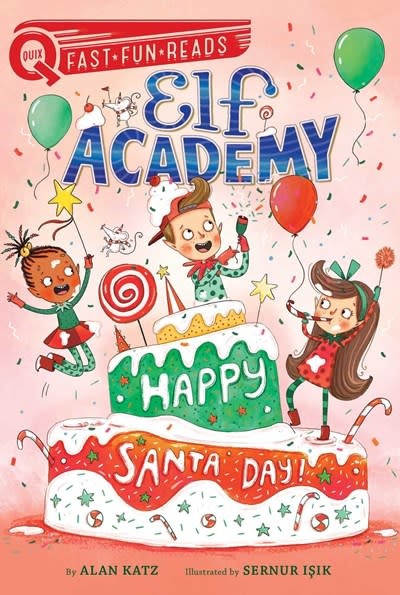 The Elf Academy elves throw a surprise party for Santa in this third book in a series about a young elf’s merry misadventures, part of the Aladdin QUIX line of fun-to-read, short chapter books that’s perfect for emerging readers!

The elves decide to throw a super-duper surprise party for Santa, complete with gifts, treats, and decorations! Andy Snowden has a million and one ideas to make the party the best one ever. What could possibly go wrong?

Alan Katz has been a print and television comedy writer for more than twenty years. In addition to being a multiple Emmy nominee for his work on The Rosie O’Donnell Show and Disney’s Raw Toonage, he has written for children’s programming on Nickelodeon, ABC Television, Warner Bros. Animation’s Taz-Mania, and many others. Alan is the author of several adult humor books, humorous essays for The New York Times and other publications, and books for young readers. Alan lives in Weston, Connecticut, with his journalist wife, Rose, and their children Simone, Andrew, Nathan, and David. Visit him online at AlanKatzBooks.com.

Sernur Isik is an Istanbul-based illustrator and designer specializing in children’s books and all things lovely. She studied graphic design at Atatürk University of Fine Arts then worked as an illustrator for a children’s television company in Istanbul and as visual art director and character designer at a theme park. Sernur works with several different publishers creating works for children’s books and other children’s media. She also designs little sculptures using clay and ceramics that are included in exhibitions throughout the United States. Sernur loves traveling around the world and creating new stories and characters inspired by places she’s visited.