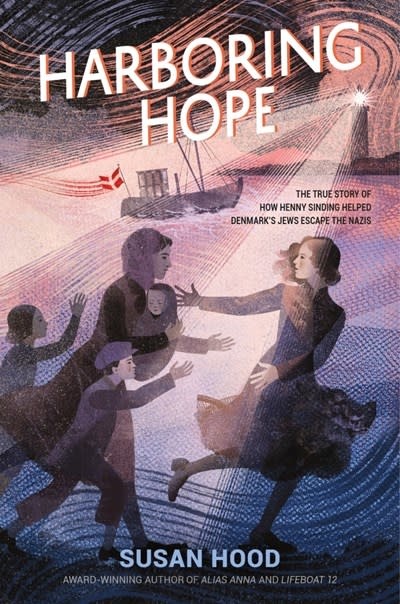 An inspirational, nonfiction novel in verse from award-winning author Susan Hood about Henny Sinding, who was just twenty-two years old when she courageously helped smuggle hundreds of Jewish families in occupied Denmark to safety in Sweden during the Holocaust.

A TRUE STORY!It wouldn’t be easybut they had to try.It was their only chance to survive.In 1943, years after the Nazi occupation of Denmark, word spread of the Gestapo’s insidious plan to round up the Jewish population and deport them to concentration camps. Angry at this attack on their friends and fellow Danes, Henny Sinding, only twenty-two years old, and the crew of Gerda lll, a lighthouse supply boat, risked everything to smuggle their Jewish compatriots across the Øresund strait to safety in Sweden. In Henny’s words, “It was the right thing to do so we did it. Simple as that.” But what happened when their operation’s cover was blown and it was Henny’s turn to escape?Told in verse by award-winning author Susan Hood (Alias Anna and Lifeboat 12), this is the moving true story of how Henny and her fellow resistance fighters helped defend democracy and the Danish Jewish community during Germany’s occupation of Denmark in World War ll.Includes extensive back matter with primary sources, additional information, further reading, and photographs.

Susan Hood is the award-winning author of many books for young readers, including Alias Anna, Lifeboat 12, Ada’s Violin, Brothers in Arms, The Last Straw: Kids vs. Plastics, Shaking Things Up, and Titan and the Wild Boars. She is the recipient of an E. B. White Read-Aloud Picture Book Honor, the Christopher Award, the Américas Award for Children’s and Young Adult Literature, the Golden Kite Award, and the Bank Street Flora Stieglitz Straus Award, given annually for “a distinguished work of nonfiction.” Visit her at susanhoodbooks.com.