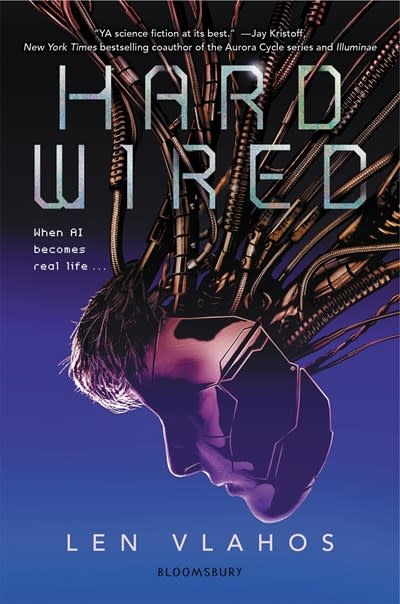 From Morris finalist Len Vlahos comes a contemporary sci-fi story about a boy who might not be human—for fans of Westworld and Black Mirror.

Quinn thinks he’s a normal fifteen-year-old. He plays video games, spends time with his friends, and crushes on a girl named Shea. But a shocking secret brings his entire world crashing down: he’s not a boy. He’s an artificial intelligence.

When Quinn learns the truth—that he’s part of a multibillion-dollar university experiment and the first fully self-aware AI in the world—his life spirals into a never-ending nightmare.

Everything he knew was a lie. Scientists perform cruel experiments on him, and his only link to the outside world is monitored 24/7. Quinn finds himself completely alone, until he connects with Shea, the real girl behind the virtual construct. As Quinn questions who he can trust, he also wonders, where does he belong?

Award-winning author Len Vlahos offers a perfect blend of science fiction and contemporary in this unputdownable, high-stakes tale that explores big questions about what it means to be a person.

Len Vlahos dropped out of NYU film school in the mid ‘80s to play guitar and write songs for Woofing Cookies, a punk-pop four piece that toured up and down the East Coast, and had two singles and one full-length LP on Midnight Records. After the band broke up, he followed his other passion, books. He is the author of Life in a Fishbowl, as well as The Scar Boys, a William C. Morris Award finalist and a #1 Indie Next pick, and Scar Girl, the book’s sequel. Len lives in Denver with his wife and two young sons, where he owns the Tattered Cover Book Store. www.lenvlahos.com • @LenVlahos