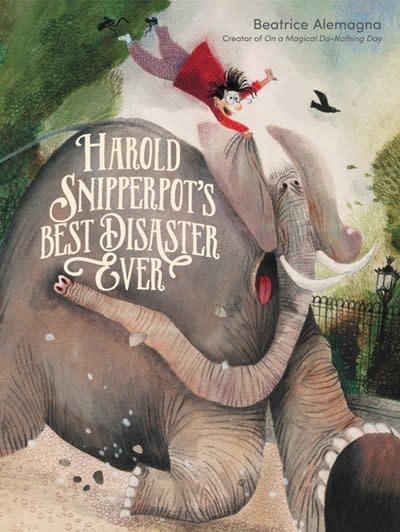 In the highly anticipated follow-up to On a Magical Do-Nothing Day, from knockout author-illustrator Beatrice Alemagna, seven-year-old Harold Snipperpot tells the story of his extraordinarily chaotic and ultimately miraculous first real birthday party ever.

Harold Snipperpot never had a birthday party because his parents are cranky and hate celebrations. But as his seventh birthday approaches, his mom and dad notice that Harold is unbearably sad. When Mom calls the neighborhood fixer-upper, Mr. Ponzio, and asks if he can make her son a party, Mr. Ponzio assures the family that Harold’s birthday will be nothing less than extraordinary.

On his birthday, Harold opens the door to find a line of animals that stretches all the way down the block! At first, an animal party seems fun. Then the animals start acting . . . like animals! With a polar bear clawing the family’s velvet sofa, a hippo soaking in the tub, and a house buried underneath a carpet of animal poo, Harold realizes that the party is just too much. Taking charge, clever Harold thinks of a creative way to remedy the chaos, and in so doing he makes his birthday even more spectacular.

With bright, dazzling illustrations, bits of magic, a fantastic fold-out page, and an oh-so-tender ending, Harold Snipperpot’s Best Disaster Ever is a party like no one has ever seen.