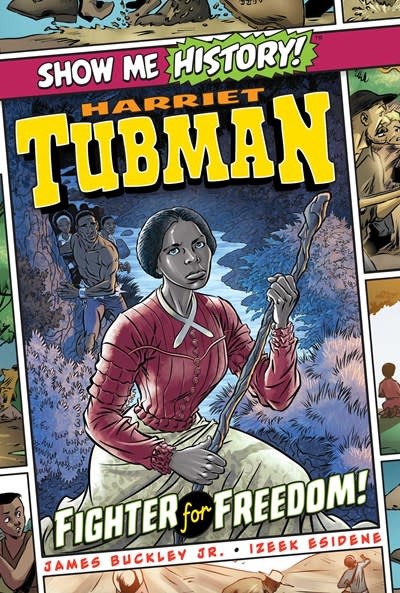 Harriet Tubman: Fighter for Freedom! tells the inspiring story of a woman who not only escaped from slavery in 1849 but also risked her life to return to the American South in order to free others from bondage. This biography, told in graphic novel format, presents Tubman’s life in detail: her childhood on a Maryland plantation, her work with the Underground Railroad to help slaves escape to freedom, and her years as a champion of women’s rights. With colorful illustrations and historically accurate text, this entertaining account of Tubman’s life will inspire a new generation of readers with the true story of one of America’s greatest national heroes.

Izeek Esidene has nurtured a love for illustrating all his life. He is the artist on the StarGazers series and other client illustrations for Anomalous Comics Art Studio. A relative newcomer to the graphic novel medium, Izeek is interested in coming to the United States to further his career in comics. He lives in Lagos, Nigeria.

John Roshell is a co-founder of Comicraft, the lettering and design studio best known for pioneering the process of digitally lettering comic books. He has lettered thousands of comics for Marvel, DC, Dark Horse, Blizzard, and more; created hundreds of typefaces widely used in comics and video games; and designed loads of logos for franchises like the Avengers, Daredevil, Black Panther, and Angry Birds. He lives in Santa Barbara with his wife Starshine, two boys, and a somewhat ugly dog.

Cassie Anderson is a freelance artist based in Portland, Oregon. She is the creator behind the webcomic-turned-graphic novel Extraordinary: The Story of An Ordinary Princess, as well as the artist and letterer on the Lifeformed series, a sci-fi YA comic about growing up and doing hard things set in an alien invasion. Both books are published by Dark Horse Comics. She also enjoys making journal and autobiographical comics about her life. When she's not drawing comics, Cassie can be found baking tasty treats or exploring the great outdoors.

Caitlin Like is a cartoonist and a member of the comics collective Helioscope Studios in Portland, Oregon. She is a former member of the XOXO Outpost and has worked on comics for Dark Horse and Oni Press, including Stranger Things, Aliens, Ghost, My Boyfriend is a Bear, and Buffy the Vampire Slayer. She has drawn or colored books for indie publishers Thrillbent, Augsburg Fortress, and Cave Pictures Publishing; and she took part in the anthology, Can I Pet Your Werewolf. Her current work includes working as a long-term colorist assistant to Trekker creator Ron Randall and colorist Dan Jackson, and self-publishing indie comics work through Kickstarter and Gumroad.