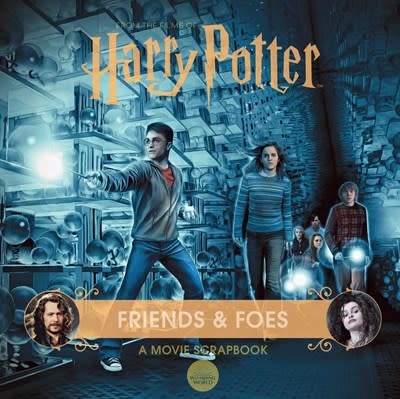 Packed with exclusive bonus collectibles, Harry Potter: Friends and Foes: A Movie Scrapbook focuses on the unique feuds and friendships seen in the Harry Potter films.

From Harry Potter and Lord Voldemort to Ron Weasley and Hermione Granger, the many complex and nuanced relationships between characters are key elements of the Harry Potter films.

This film-inspired movie scrapbook features detailed profiles on the many foes and friendships of the wizarding world, such as that between Harry Potter and Lord Voldemort, Ron Weasley and Hermione Granger, Harry and Professor Snape, and everything in between. Concept art and behind-the-scenes photography, give fans an in-depth look at the key relationships at the heart of the series. Filled with filmmaking secrets and celebrating the visionary artistry behind the Harry Potter films, this unique volume brings the friends and foes from the Harry Potter films to life like never before. Packed with bonus features, including stickers, posters, and more, Friends and Foes: A Movie Scrapbook is destined to be a must-have collectible for fans of Harry Potter.

MEMORABLE FILM SCENES: Relive the powerful, heartwarming, and exciting scenes between closely-tied characters including Harry and Snape, Ron and Hermione, and Professors Dumbledore and McGonagall

BEHIND THE SCENES SECRETS: Discover the process of establishing character relationships through script, costuming, casting and more

EXCLUSIVE BONUS COLLECTIBLES: Filled with stickers, posters and other artifacts inspired by the Harry Potter films

COMPLETE YOUR COLLECTION: A companion to Harry Potter: Spells and Charms: A Movie Scrapbook

Jody Revenson has written extensively about the Harry Potter films. In her first foray into the Wizarding World, she edited and contributed to The New York Times best sellers Harry Potter: Film Wizardry and Harry Potter: Page to Screen.