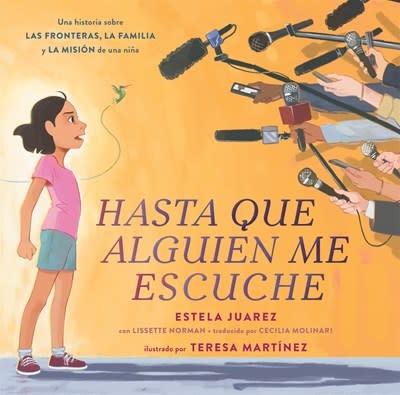 The true story of Estela Juarez, a young American girl who writes letters to her local newspaper, to Congress, and even to the president, pleading for someone to listen and reunite her family after her mother's deportation.

The Juarez family lives together in a happy home full of love. Or, at least, they used to.

When Estela was eight, her mom was deported to Mexico. She knew she had to do something. So Estela wrote letters: to local newspapers, Congress, the President, and anyone else who might help. She wrote and wrote and, finally, someone listened.

In this heart wrenching, autobiographical picture book, eight-year-old Estela Juarez's letters take her from local news appearances all the way to the Democratic National Convention, where she discovers the power in her words and promises to keep using her voice until her family is together again.

When Estela Juarez was eight years old, her mother, Alejandra, was deported to Mexico. It was then that Estela transformed her love of writing in her diary into writing letters to her local newspaper, to Congress, and to the president. Estela hopes to one day become an immigration lawyer and a Congresswoman to advocate for the unification of separated families.

Teresa Martinez studied graphic design and learned traditional painting techniques in Italy. Today, she lives in Puerto Vallarta, happily drawing for kids as she did during her school days. Her books include The Little Girl with the Big Voice and The Halloween Tree. teresa-mtz.com