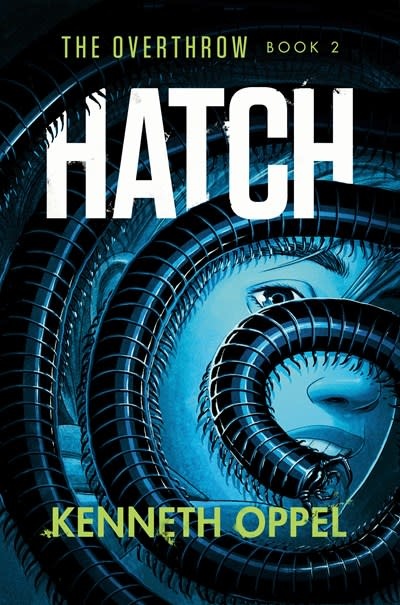 Fans left desperate for more at the end of Bloom will dive into this second book of the Overthrow trilogy—where the danger mounts and alien creatures begin to hatch.

First the rain brought seeds. Seeds that grew into alien plants that burrowed and strangled and fed.

Seth, Anaya, and Petra are strangely immune to the plants’ toxins and found a way to combat them. But just as they have their first success, the rain begins again. This rain brings eggs. That hatch into insects. Not small insects. Bird-sized mosquitos that carry disease. Borer worms that can eat through the foundation of a house. Boat-sized water striders that carry away their prey.

But our heroes aren’t able to help this time—they’ve been locked away in a government lab with other kids who are also immune. What is their secret? Could they be…part alien themselves? Whose side are they on?

Kenneth Oppel expertly escalates the threats and ratchets up the tension in this can’t-read-it-fast-enough adventure with an alien twist. Readers will be gasping for the next book as soon as they turn the last page…

Series Overview: A super-scary action-adventure trilogy about an unexpected alien incursion, and the three young teens who may the only ones able to fight back. An accelerated schedule: book 1: Bloom, will release in March 2020; book 2: Hatch, will release in September 2020, and book 3: Thrive will release in May 2021.

KENNETH OPPEL is one of the most highly regarded authors of middle-grade fiction writing today. Some of his best-known titles are Inkling,The Nest, Airborn, a 2005 Printz Honor Book, and Silverwing. Find him online at www.kennethoppel.ca and @KennethOppel.