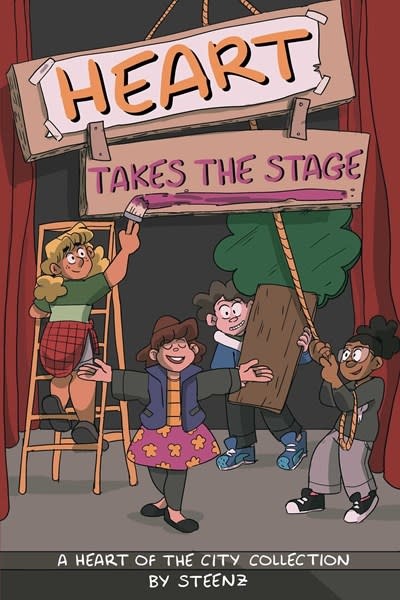 "Warm, funny, and a visual delight, Steenz's take on Heart of the City is next-level."  –Dana Simpson, Phoebe and Her Unicorn

This first book collection of Heart of the City comics by the strip’s new creator, Steenz, is packed with outstanding art, a diverse cast of characters, and engaging, positive storylines about friendship, pop culture, ghost stories, and a wide range of real-world issues.

Heart Lamarr is a girl with big dreams who lives in Philadelphia with her single mom. She has her sights set on a life of theater, but she runs into plenty of drama off-stage, too. Luckily, her best friends Dean, Kat, and Charlotte form a stellar supporting cast to help Heart navigate the challenging world of school plays, cliques, rumors, and everything else middle school throws at them.

Christina Stewart, known as Steenz, is a St. Louis-based cartoonist, editor, and professor. They are the cartoonist on the Ringo Award-nominated syndicated comic strip Heart Of The City, the co-creator of Dwayne McDuffie Award-winning graphic novel Archival Quality (Oni Press), and are featured in short story anthologies such as Eisner and Ignatz Award-winning ELEMENTS: Fire, Mine!, and Dead Beats. Steenz launched and edited the popular RPG periodical Rolled & Told. They participate in and create community-building comics-related programming, and are a frequent panelist at comic cons. Steenz currently teaches cartooning at Webster University while editing titles from independent publishers. They live with their husband, two cats, and watch a lot of esoteric social documentaries.