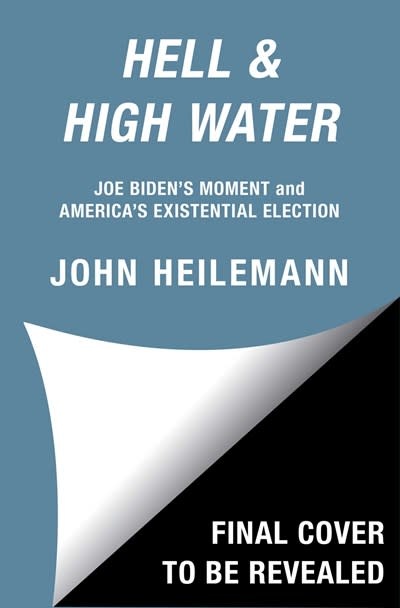 From the #1 New York Times bestselling coauthor of Game Change, John Heilemann, comes a cinematic, page-turning account of Joe Biden’s triumph over Donald Trump in a presidential election unlike any in American history—and with truly existential stakes.

Until this past presidential election, Joe Biden’s political career was defined as much by tragedy and disgrace as by his many achievements; his decades-long quest for the White House was a story of embarrassment, pain, and failure. But in this book, bestselling author John Heilemann argues that 2020 was Biden’s moment precisely because his history of loss and grief imbued him with a quality—human empathy—that turned out to be a superpower at a time when the country was wracked by trauma…and his opponent was a pathological narcissist.

In Hell & High Water, Heilemann departs from voice-of-God narration and reconstructed “insider” history to render a vivid, first-person chronicle of what he saw on the campaign trail against the apocalyptic backdrop of 2020—and what he knows from a relationship with Biden that goes back over thirty years. The book combines Heilemann’s rare storytelling talents with his hard-won perspective on the factors that infused the election with existential intensity: a raging pandemic, a ruinous recession, a national reckoning with racial justice, and, finally, a riot at the Capitol incited by a president who lived to break every rule…and maybe our democracy itself.

John Heilemann is the #1 New York Times bestselling coauthor of Game Change and Double Down. He is a host, executive producer, and creator of Showtime’s The Circus, the heralded weekly political documentary series; executive editor of The Recount, a video-first news startup; and national affairs analyst for NBC News and MSNBC, where he appears regularly on Morning Joe, Deadline: White House, The Last Word, The 11th Hour, and other programs. Heilemann lives with his wife and two Great Danes in New York City.