Home » Her Honor: My Life on the Bench...What Works, What's Broken, & How to Change It [Memoir] 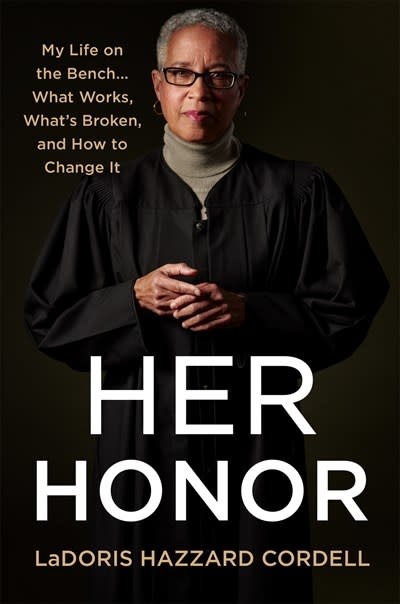 Her Honor: My Life on the Bench...What Works, What's Broken, & How to Change It [Memoir]

Few of us know anything about the judges who wield extraordinary authority over our lives and communities. Why are some judges appointed but others elected? Did you know there are no qualifications at all to serve on the Supreme Court? Or that most law schools don’t offer a course on judging? Why should the average person have confidence in a legal system they don’t understand? Unfortunately, many don’t. A 2014 survey revealed 43% of Americans think the justice system is not fair, and many feel it’s especially unfair to poor Americans and Blacks and Latinos. Judge Cordell, the first African American woman to sit on the Superior Court of Northern California, knows firsthand how prejudice has permeated our legal system. And yet, she believes in the system. From ending school segregation and housing discrimination, to halting the ban on interracial marriage, to legalizing same-sex marriage, these victories for justice and equality were made possible by the legal professionals and jurors who strive to make the imperfect system as fair as possible.

Her Honor is an educational, entertaining and seriously edifying way for readers to gain unprecedented access into the hearts and minds of judges. Cordell takes you into her chambers where she haggles with prosecutors and defense attorneys and into the courtroom during jury selection and sentencing hearings. She uses real cases to highlight how judges make difficult decisions, all while facing outside pressures from coworkers, the media, law enforcement, lobbyists, and the friends and families of the people involved.

Chapters shine light on the outdated felony-murder law, which holds the getaway driver as culpable as the person who pulled the trigger; on juvenile delinquents and the shift from rehabilitation to punishment, and the racial biases therein. There’s also an in-depth look at the thousands of plea bargains that allow our overburdened courts to stay afloat—as long as innocent people are willing to plead guilty. There are tales of marriages and divorces, adoptions, and contested wills—some humorous, others heartwarming, still others deeply troubling. Judge Cordell handled these challenging experiences, all while remaining a fiercely independent thinker.

Her Honor is for anyone who’s had the good or bad fortune to stand before a judge or sit on a jury. It is for anyone who wonders about the human side of the black-robed individuals who preside over our courtrooms, for true-crime junkies and people who vote in judicial elections. Most importantly, this is a book for anyone who wants to know what our legal system, for better or worse, means to the everyday lives of all Americans.

Judge LaDoris H. Cordell is a legal commentator and police reform advocate, who is a frequent commentator on news outlets including NPR, CNN, and MSNBC. A graduate of Stanford Law School, she became the first African American woman jurist in Northern California, a position she held from 1982 to 2001. Prior to her time on the bench, she was the first lawyer to open a private practice in East Palo Alto, CA, a low-income community of color, and was an Assistant Dean of Stanford Law School where she implemented a highly successful minority admissions program. Following her retirement from the bench, she was a Vice Provost at Stanford University and, in 2010, was appointed the Independent Police Auditor for the City of San Jose. Judge Cordell's public service record spans decades, during which time she has overseen commissions that investigated violence and mental health care in the jail system, as well as accounts of racism in the San Francisco police department. She has received numerous awards, including Silicon Valley NAACP’s William E.B. Dubois Award, the Iola Williams Public Service Award, the National Council of Negro Women’s Public Service Award, the Social Justice Award from Legal Advocates for Children & Youth, and the Rose Bird Memorial Award from the California Women Lawyers. Judge Cordell founded the African American Donor Task Force to increase black participation in the national bone marrow registry. She is the co-founder of the African American Composer Initiative and CA Parks for All. An artist and pianist, she resides in California with her partner and is the proud mother of two daughters.