Home » Hilo 01 The Boy Who Crashed to Earth 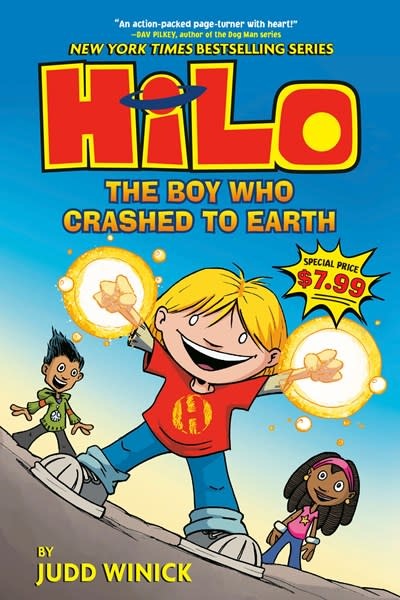 BOOM! CLANG! CRASH! D.J. and Gina are totally ordinary kids. But Hilo isn’t! Hilo just fell out of the sky and doesn’t know where he came from, or what he’s doing on Earth. (Or why going to school in only your underwear is a BAD idea!)…But UH-OH, what if Hilo wasn’t the only thing to fall to our planet? Can the trio unlock the secrets of Hilo’s past? Can Hilo survive a day at school? Find out in HILO-a laugh-out-loud, epic story of friendship! Adventure! (And the occasionaly mutant space robot).

Here’s what people (and robots!) are saying about Hilo!

“Every kid would love a pal like HILO, and every kid will love this book!” —Lincoln Peirce, bestselling author of the Big Nate series

“A perfect book for any kid who ever needed a friend and then had one with superpowers fall from space.” —Seth Meyers, actor, comedian and writer

”A story that can be enjoyed by the entire family.“—The New York Times

”A story that can be enjoyed by the entire family.“—The New York Times

”My students are obsessed with this series. OBSESSED!"—Colby Sharp, teacher, blogger, and co-founder of Nerdy Bookclub

Series Overview: Hilo debuted in Fall 2015 and has become a bestselling kid and critic favorite, recognized in classrooms everywhere. Hilo 1-6 is the story of Hilo’s war with Razorwark. In Hilo 7-9, it’s fan-favorite Gina’s turn to save the world. Look for Hilo 8 in Spring 2022!

JUDD WINICK grew up on Long Island, where he spent countless hours doodling, reading X-Men comics and the newspaper strip Bloom County, and watching Looney Tunes. Today, Judd lives in San Francisco with his wife, Pam Ling; their two kids; and their cat, Chaka. When Judd isn’t collecting far more action figures and vinyl toys than a normal adult, he is a screenwriter and an award-winning cartoonist. Judd has written bestselling comic book series, including Batman, Green Lantern, Green Arrow, Justice League, and Star Wars, and was head writer on the Hulu network’s animated series, The Awesomes. Judd also appeared as a cast member of MTV’s The Real World: San Francisco and is the author of the highly acclaimed graphic novel Pedro and Me, about his Real World roommate and friend, AIDS activist Pedro Zamora. Visit Judd and Hilo online at www.juddwinick.com.