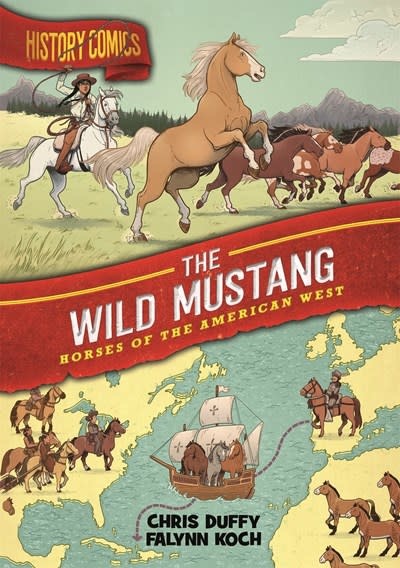 Turn back the clock with History Comics, First Second's new middle-grade nonfiction graphic novel series! In this volume, learn how wild mustangs were first introduced to America and how they still roam free today.

Fight for equality in the Montgomery Bus Boycott, train with the first civilian selected for a mission to space, help spark a rebellion at the Stonewall Riot, and so much more! With History Comics, the past comes alive in a way that's edifying, entertaining, and relevant to our modern lives.

In this volume, learn how horses were brought to the Western Hemisphere by Spanish conquistadors and immediately became a crucial part of the American story. For the Spanish, they were a tool of conquest. For Native Americans, they brought on a new way of life where horsemanship and horse-trading were central. And for the entire world, wild mustangs became a renowned wonder of the American West.

Chris Duffy has written many comic books, for Marvel and DC Comics, and has edited comics and graphic novels for Nickelodeon Magazine, United Plankton Pictures, DC Comics, and First Second, where he edited the New York Times best-seller Fairy Tale Comics. He currently is a senior editor at Workman Publishing, and lives in Cold Spring, New York, where he has seen a number of horses, but hasn't managed to ride one yet.

Falynn Koch graduated with a masters in sequential art from The Savannah College of Art and Design, is a graduate of the International Culinary Center, and once even owned her own food truck. She is also the author of Science Comics: Plagues, Science Comics: Bats, and Maker Comics: Bake Like a Pro!