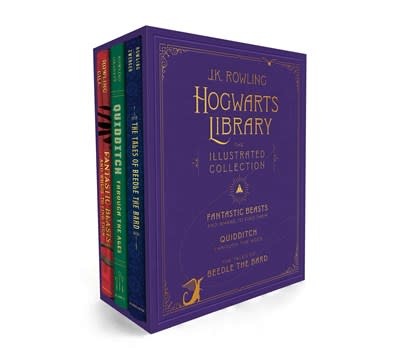 An essential trio of books from the Hogwarts Library, now lavishly illustrated and collected in a giftable boxed set!

This beautifully designed boxed set contains three essential volumes consulted by generations of students at Hogwarts: Fantastic Beasts and Where to Find Them, Quidditch Through the Ages, and The Tales of Beedle the Bard. Written by J.K. Rowling in aid of Comic Relief and Lumos, these companion volumes to the Harry Potter series have now been fully illustrated in brilliant color by award-winning artists Olivia Lomenech Gill, Lisbeth Zwerger, and Emily Gravett. This special edition boxed set is a beautiful gift for Harry Potter fans of all ages and a chance to explore the incredible richness of the wizarding world.

Olivia Lomenech Gill has a first class degree in Theatre from the University of Hull and an MA in Printmaking from Camberwell College of Arts. She has built her career as a professional fine artist and has been exhibited at all the major London art fairs. Olivia's first professional illustration commission, Where My Wellies Take Me, written by Clare and Michael Morpurgo, was shortlisted for the Kate Greenaway Medal and won the English Association Picture Book Award. Olivia lives and works in north Northumberland in a timber studio she built by hand with her husband, a paper conservator. They also have a workshop in a nearby village, which houses Olivia's three-ton printing press.

Emily Gravett won the Macmillan Prize for Illustration with her first book Wolves, which went on to win the Kate Greenaway Medal and the Boston Globe-Horn Book Honor, and marked the beginning of an international career creating extraordinary and innovative books for children: Little Mouse’s Big Book of Fears won the Kate Greenaway Medal for her a second time. Her own picture books are published in more than 20 languages and she has also collaborated with some of the most creative writers working today including Julia Donaldson, A.F. Harrold, and Matt Haig. She lives in Brighton, United Kingdom, with her daughter and partner.

Lisbeth Zwerger is the recipient of the Hans Christian Andersen Medal for her contributions to children's literature, among many other awards, and her work has been included in the New York Times Best Illustrated Books list. She has illustrated editions of many classic tales, including Alice's Adventures in Wonderland, The Wizard of Oz, The Little Mermaid, A Christmas Carol, and several tales by the Brothers Grimm. She lives and works in Vienna, Austria.

J.K. Rowling is best known as the author of the seven Harry Potter books, which were first published between 1997 and 2007. The enduringly popular adventures of Harry, Ron, and Hermione have sold over 500 million copies, been translated into over 80 languages, and made into eight blockbuster films, the last of which was released in 2011. Alongside the Harry Potter series, she also wrote three short companion volumes -- Quidditch Through the Ages, Fantastic Beasts and Where to Find Them, and The Tales of Beedle the Bard -- which were published in aid of Comic Relief and Lumos. In 2016, J.K. Rowling collaborated with playwright Jack Thorne and director John Tiffany to resume Harry’s story in a stage play, Harry Potter and the Cursed Child, which opened first in London, and is now playing on Broadway and in Melbourne, Australia. In the same year, she made her debut as a screenwriter with the film Fantastic Beasts and Where to Find Them, which was inspired by the original companion volume and features magizoologist Newt Scamander. Her second screenplay, Fantastic Beasts: The Crimes of Grindelwald, was released in cinemas in 2018. J.K. Rowling has also written a stand-alone novel for adults, The Casual Vacancy, and, under the pseudonym Robert Galbraith, is the author of the Strike crime series. She lives in Scotland with her family, and is at her happiest alone in a room, making things up.