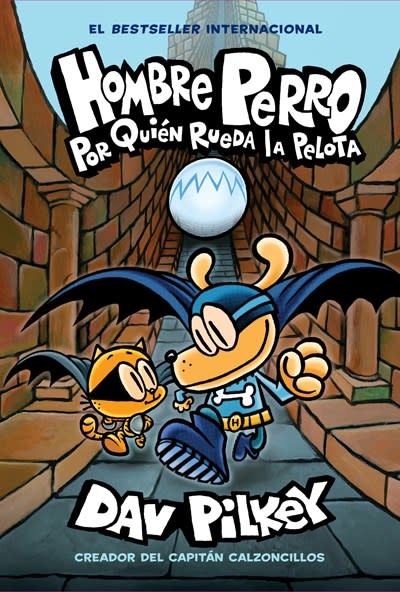 Howl with laughter with Dog Man, the internationally bestselling series from Dav Pilkey, the creator of Captain Underpants!

The Supa Buddies have been working hard to help Dog Man overcome his bad habits. But when his obsessions turn to fears, Dog Man finds himself the target of an all-new supervillain! Meanwhile, Petey the Cat has been released from jail and starts a new life with Li'l Petey. But when Petey's own father arrives, Petey must face his past to understand the difference between being good and doing good.

When Dav Pilkey was a kid, he was diagnosed with ADHD and dyslexia. Dav was so disruptive in class that his teachers made him sit out in the hallway every day. Luckily, Dav loved to draw and make up stories. He spent his time in the hallway creating his own original comic books—the very first adventures of Dog Man and Captain Underpants. In college, Dav met a teacher who encouraged him to illustrate and write. He won a national competition in 1986 and the prize was the publication of his first book, World War Won. He made many other books before being awarded the 1998 California Young Reader Medal for Dog Breath, which was published in 1994, and in 1997 he won the Caldecott Honor for The Paperboy. The Adventures of Super Diaper Baby, published in 2002, was the first complete graphic novel spin-off from the Captain Underpants series and appeared at #6 on the USA Today bestseller list for all books, both adult and children’s, and was also a New York Times bestseller. It was followed by The Adventures of Ook and Gluk: Kung Fu Cavemen from the Future and Super Diaper Baby 2: The Invasion of the Potty Snatchers, both USA Today bestsellers. The unconventional style of these graphic novels is intended to encourage uninhibited creativity in kids. His stories are semi-autobiographical and explore universal themes that celebrate friendship, tolerance, and the triumph of the good-hearted. Dav loves to kayak in the Pacific Northwest with his wife.