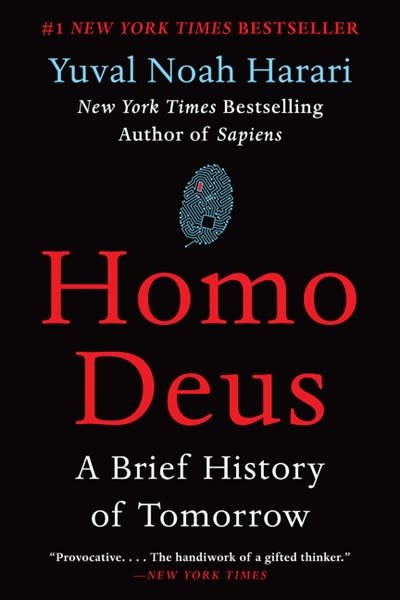 Yuval Noah Harari, author of the critically-acclaimed New York Times bestseller and international phenomenon Sapiens, returns with an equally original, compelling, and provocative book, turning his focus toward humanity’s future, and our quest to upgrade humans into gods

Over the past century, humankind has managed to do the impossible: turn the uncontrollable forces of nature—namely, famine, plague, and war—into manageable challenges. Today more people die from eating too much than from eating too little; more people die from old age than from infectious diseases; and more people commit suicide than are killed by soldiers, terrorists and criminals combined. We are the only species in earth’s long history that has single-handedly changed the entire planet, and we no longer expect any higher being to mold our destinies for us.

What then will replace famine, plague, and war at the top of the human agenda? What destinies will we set for ourselves, and which quests will we undertake? Homo Deus explores the projects, dreams, and nightmares that will shape the twenty-first century, from overcoming death to creating artificial life. But the pursuit of these very goals may ultimately render most human beings superfluous. So where do we go from here? And how can we protect this fragile world from our own destructive powers? We cannot stop the march of history, but we can influence its direction.

Future-casting typically assumes that tomorrow, at its heart, will look much like today: we will possess amazing new technologies, but old humanist values like liberty and equality will guide us. Homo Deus dismantles these assumptions and opens our eyes to a vast range of alternative possibilities, with provocative arguments on every page, among them:

• The main products of the twenty-first-century economy will not be textiles, vehicles, and weapons but bodies, brains and minds.

• While the industrial revolution created the working class, the next big revolution will create the useless class.

• The way humans have treated animals is a good indicator for how upgraded humans will treat us.

• Democracy and the free market will both collapse once Google and Facebook know us better than we know ourselves, and authority will shift from individual humans to networked algorithms.

• Humans won’t fight machines; they will merge with them. We are heading toward marriage rather than war.