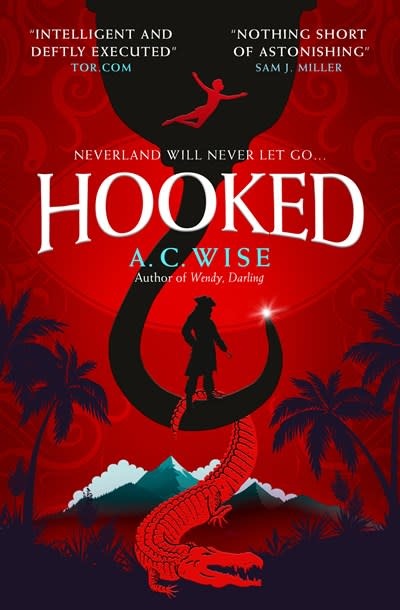 A gorgeous literary feminist take on what happened to Wendy and Captain Hook after Neverland from the bestselling author of Wendy, Darling, perfect for fans of Christina Henry and V.E. Schwab.

Captain James Hook, the immortal pirate of Neverland, has died a thousand times. Drowned, stabbed by Peter Pan’s sword, eaten by the beast swimming below the depths, yet James was resurrected every time by one boy’s dark imagination. Until he found a door in the sky, an escape. And he took the chance no matter the cost.

Now in London twenty-two years later, Peter Pan’s monster has found Captain Hook again, intent on revenge. But a chance encounter leads James to another survivor of Neverland. Wendy Darling, now a grown woman, is the only one who knows how dark a shadow Neverland casts, no matter how far you run. To vanquish Pan’s monster once and for all, Hook must play the villain one last time…

A.C. Wise is the author of two collection published by Lethe Press, a novella published by Broken Eye Books, and short stories appearing in publications such as Uncanny, Tor.com, and The Best Horror of the Year Volume 10, among other places. Her work has won the Sunburst Award for Excellence in Canadian Literature of the Fantastic, has twice been a finalist for the Nebula Award, twice been a finalist for the Sunburst Award, as well as being a finalist for the Lambda Literary Awards. In addition to her fiction, she contributes two semi-regular review columns (Women to Read and Non-Binary Authors to Read) to The Book Smugglers. She tweets at @ac_wise.