Home » Hope Is an Arrow: The Story of Lebanese-American Poet Khalil Gibran 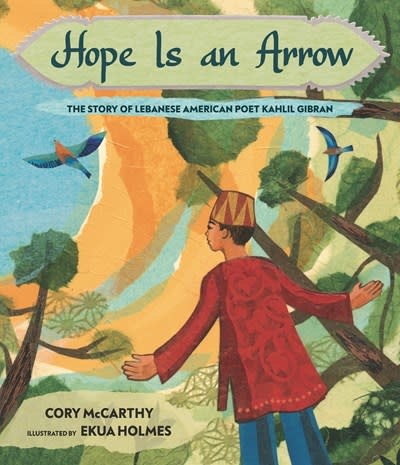 Hope Is an Arrow: The Story of Lebanese-American Poet Khalil Gibran

Before Kahlil Gibran ever put his pen to the page to eventually become the world’s third best-selling poet of all time, he was Gibran Khalil Gibran, a child immigrant from Lebanon who had a secret hope. That hope sprung from his experiences in Lebanon, where Christians and Muslims crashed like two strong headwinds, and in Boston, where the wealthy crashed with the poor. His secret hope: to connect all people from around the world, bringing them together despite their differences and beliefs.

But how could he bring people together when he himself felt fractured? He was Kahlil Gibran, the Arab American who struggled to make a home in America, and he was Gibran Khalil Gibran, the Lebanese boy who missed his home, struggling to hold on to his roots.

Kahlil found his answer in writing poetry. Kahlil’s secret hope, shot like an arrow from Lebanon, feathered by the spirit of American independence, became a book called The Prophet. And even today, Kahlil’s words continue to fly around the world, bringing people together.

Cory McCarthy writes for children and young adults, including their verse novel, Name Me America, which won the middle grade category of the 2014 Katherine Paterson Prize from Hunger Mountain, and Breaking Sky, currently under option with Sony Pictures. They hold a degree in poetry from Ohio University and an MFA in writing for children and young adults from Vermont College of Fine Arts. Like Kahlil Gibran, their family emigrated from Lebanon and settled in New England. Cory McCarthy lives in Vermont with their family and is on faculty at Vermont College of Fine Arts.