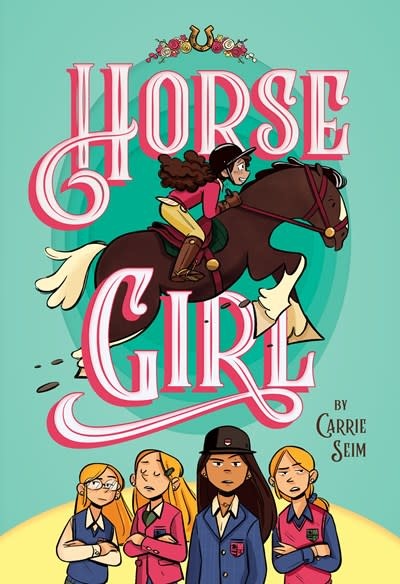 Gallop into the world of horse girls! This hilariously voiced middle-grade novel is Mean Girls meets Black Beauty for the horse girl crew. Humanizing, heart-warming, and wildly funny, Horse Girl redefines what it means to be a young girl who loves horses.

Seventh-grader Wills is head-over-hoof for horses, and she is beyond excited when she gets the chance to start training at the prestigious Oakwood Riding Academy. But Amara, the Queen of the #HorseGirls, and her posse aren’t going to let the certifiably dork-tagious Wills trot her way into their riding club so easily. Between learning the reins of horse riding, dealing with her Air Force pilot mom being stationed thousands of miles from home, and keeping it together in front of (gasp!) Horse Boys, Wills will learn that becoming a part of #HorseGirlWorld isn’t easy. But with her horse, Clyde, at her side, it sure will be fun!

Complete with comedic, original hoof notes to acquaint the less equestrian among us, Horse Girl delivers everything a young readers wants: mean girls, boy problems, and embarrassingly goofy dad jokes. And it does so on the back of a pony.

Carrie is a middle-grade author who has served as a staff writer for several Nickelodeon comedy variety shows, and her essays on awkwardness are featured in the book Mortified: Life Is a Battlefield. As a journalist and essayist, she has written for The New York Times, The Atlantic, Cosmopolitan, The New York Post, McSweeney’s, Architectural Digest, Condé Nast Traveler, and NPR’s UnFictional.