Home » How It Went 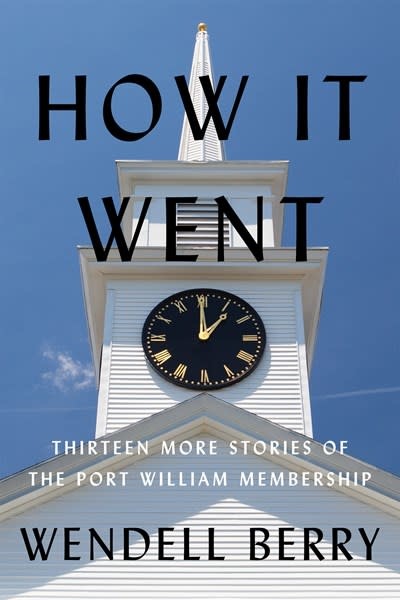 For those readers of his poetry and inspired by his increasingly vital work as advocate for rational land use and the right-size life, these stories of Wendell Berry's offer entry into the fictional place of value and beauty that is Port William, Kentucky. Berry has said it's taken a lifetime for him to learn to write like an old man, and that's what we have here, stories told with grace and ease and majesty. Wendell Berry is one of our greatest living American authors, writing with the wisdom of maturity and the incandescence that comes of love.

These thirteen new works explore the memory and imagination of Andy Catlett, one of the well-loved central characters of the Port William saga. From 1932 to 2021, these stories span the length of Andy’s life, from before the outbreak of the Second World War to the threatened end of rural life in America.

WENDELL BERRY, an essayist, novelist, and poet, has been honored with the T. S. Eliot Prize, the Aiken Taylor Award in Modern American Poetry, the John Hay Award of the Orion Society, and the Dayton Literary Peace Prize Richard C. Holbrooke Distinguished Achievement Award, among others. In 2010, he was awarded the National Humanities Medal by President Barack Obama, and in 2016, he was the recipient of the Ivan Sandrof Life Achievement Award from the National Book Critics Circle. Berry lives with his wife, Tanya Berry, on their farm in Henry County, Kentucky.