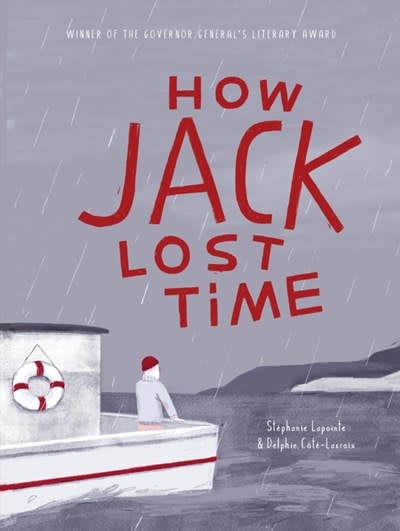 “An artful and timeless exploration of love, loss, grief, and family, How Jack Lost Time will appeal to readers of Charlie Mackesy’s The Boy, The Mole, The Fox and The Horse, and other picture books for older readers and adults. Jack is not like other sea captains. Fishermen say he’s weird, but Jack only cares about one thing: the grey whale with the scarred dorsal fin, the one who swallowed up his son, Julos, years before. Jack promises he will not come home without Julos, even if it means losing himself in the process. Then, on a night like any other, Jack sees something lurking around his boat. He throws himself into the whale’s dark mouth. But is he too late? Will his son recognize him after years of being alone?Poignant, original, and vibrant, this contemporary nautical fable journeys into the heart of the human spirit, and will move readers young and old.Winner of the 2019 Governor General’s Award for Youth Literature—French Language

STÉPHANIE LAPOINTE is a singer, actress, documentary director, and author from Montreal. She won the Grand Prix Lux Infopresse and Governor General’s Award for Young People’s Literature—Illustrated Books in 2016 with Grand-père et la Lune (Grandfather and the Moon), illustrated by Rogé.DELPHIE CÔTÉ-LACROIX is a multidisciplinary visual artist with a background in graphic design. She uses simple composition and a limited color palette to create images that are delicate yet impactful.