Home » How the Post Office Created America: A History 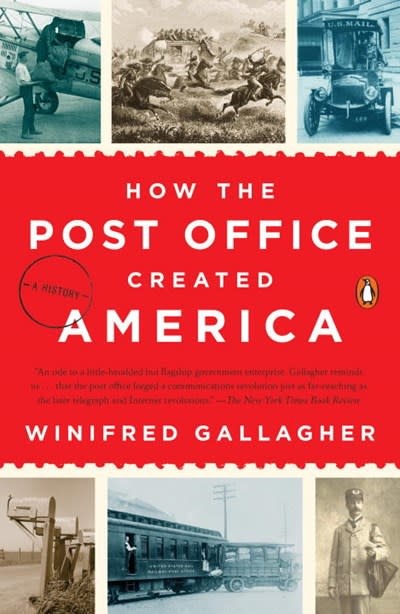 A masterful history of a long underappreciated institution, How the Post Office Created America examines the surprising role of the postal service in our nation’s political, social, economic, and physical development.

Winifred Gallagher presents the history of the post office as America’s own story, told from a fresh perspective over more than two centuries. The founders established the post office before they had even signed the Declaration of Independence, and for a very long time, it was the U.S. government’s largest and most important endeavor. The mandate to deliver the mail—then “the media”—imposed the federal footprint on vast, often contested parts of the continent, and enabled America to shift from an agrarian to an industrial economy and to develop the publishing industry, the consumer culture, and the political party system. Still one of the country’s two major civilian employers, the post was the first to hire women, African Americans, and other minorities for positions in public life.

The post office is now at a crossroads. Before deciding its future, Americans should understand what this grand yet overlooked institution has accomplished since 1775 and consider what it should and could contribute in the twenty-first century. Gallagher argues that the imperiled post office deserves this effort, because just as the founders anticipated, it created forward-looking, communication-oriented, idea-driven America.

Winifred Gallagher’s books include House Thinking, Just the Way You Are (a New York Times Notable Book), Working on God, The Power of Place, Rapt: Attention and the Focused Life, and New: Understanding Our Need for Novelty and Change. She has written for numerous publications, such as Atlantic Monthly, Rolling Stone, and The New York Times. She lives in Manhattan and Dubois, Wyoming.