Home » How to Lead: Wisdom from the World's Greatest CEOs, Founders, & Game Changers 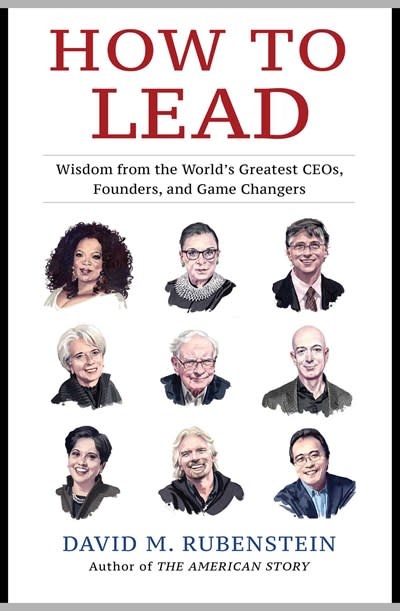 How to Lead: Wisdom from the World's Greatest CEOs, Founders, & Game Changers

The essential leadership playbook. Learn the principles and guiding philosophies of Bill Gates, Jeff Bezos, Ruth Bader Ginsburg, Warren Buffet, Oprah, and many others through illuminating conversations about their remarkable lives and careers.

For the past five years, David M. Rubenstein—author of The American Story, visionary cofounder of The Carlyle Group, and host of The David Rubenstein Show—has spoken with the world’s highest performing leaders about who they are and how they became successful. How to Lead distills these revealing conversations into an indispensable leadership guidebook.

-Jeff Bezos harnesses the power of wandering, discovering that his best decisions have been made with heart and intuition, rather than analysis.

-Richard Branson never goes into a venture looking to make a profit. He aims to make the best in field.

-Phil Knight views Nike as a marketing company whose product is its most important marketing tool.

-Marillyn Hewson, who grew up in a fatherless home with four siblings in Kansas, quickly learned the importance of self-reliance and the value of a dollar.

How to Lead shares the extraordinary stories of these pioneering agents of change. Discover how each luminary got started and how they handle decision making, failure, innovation, change, and crisis. Learn from their decades of experience as pioneers in their field. No two leaders are the same.

David M. Rubenstein is the author of The American Story and cofounder and co-executive chairman of The Carlyle Group, one of the world’s largest and most successful private equity firms. Rubenstein is Chairman of the Boards of Trustees of the John F. Kennedy Center for the Performing Arts, and the Council on Foreign Relations. He is an original signer of The Giving Pledge and a recipient of the Carnegie Medal of Philanthropy and the MoMA’s David Rockefeller Award, among other philanthropic awards. The host of The David Rubenstein Show on Bloomberg TV and PBS, he lives in the Washington, DC area.