Home » How to Make an Apple Pie from Scratch: In Search of the Recipe for Our Universe, from the Origins of Atoms to the Big Bang 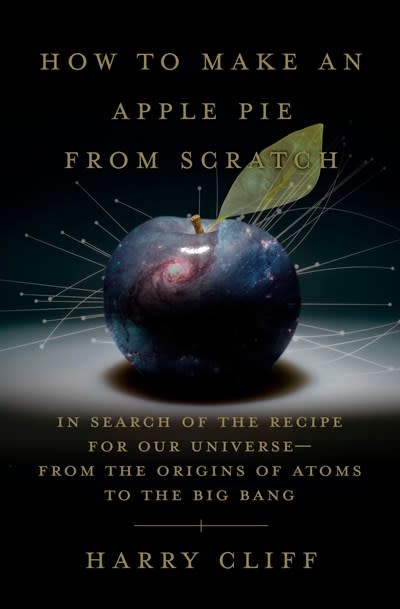 How to Make an Apple Pie from Scratch: In Search of the Recipe for Our Universe, from the Origins of Atoms to the Big Bang

By an experimental physicist working at CERN’s Large Hadron Collider, the thrilling story of the search for the most basic building blocks of our universe and the dramatically unfolding quest to unlock their cosmic origins

Carl Sagan once quipped, “If you wish to make an apple pie from scratch, you must first invent the universe.” But finding the ultimate recipe for apple pie means answering some big questions: What is matter really made of? How did it escape annihilation in the fearsome heat of the Big Bang? And will we ever be able to understand the very first moments of our universe?

In How to Make an Apple Pie from Scratch, Harry Cliff—a University of Cambridge particle physicist, researcher on the Large Hadron Collider, and acclaimed science presenter—sets out in pursuit of answers. He ventures to the largest underground research facility in the world, deep beneath Italy’s Gran Sasso mountains, where scientists gaze into the heart of the Sun using the most elusive of particles, the ghostly neutrino. He visits CERN in Switzerland to explore the “Antimatter Factory,” where this stuff of science fiction is manufactured daily (and we’re close to knowing whether it falls up). And he reveals what the latest data from the Large Hadron Collider may be telling us about the fundamental nature of matter.

Along the way, Cliff illuminates the history of physics, chemistry and astronomy that brought us to our present understanding—and misunderstandings—of the world, while offering readers a front-row seat to one of the most dramatic intellectual journeys human beings have ever embarked on.

A transfixing deep dive into origins of our world, How to Make an Apple Pie from Scratch explores not just the makeup of our universe, but the awe-inspiring, improbable fact that it exists at all.

HARRY CLIFF is a particle physicist based at the University of Cambridge and a curator at the Science Museum, London. He regularly gives public lectures and makes TV and radio appearances. His 2015 TED talk “Have We Reached the End of Physics?” has been viewed more than 2.5 million times.