Home » How to Stand Up to a Dictator 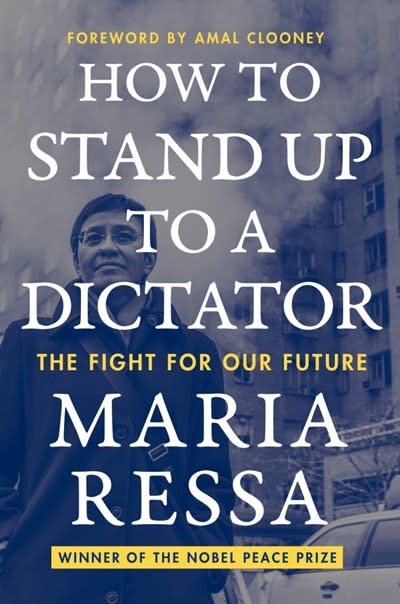 How to Stand Up to a Dictator

Introduction by Amal ClooneyFrom the recipient of the 2021 Nobel Peace Prize and founder of the Philippine journalism site Rappler comes this inspiring memoir that chronicles her career fighting fascism and those who helping to spread it, filled with insights and advice for standing against authoritarian bullies and confronting disinformation and lies.

What will you sacrifice for the truth?Journalist Maria Ressa has spent decades speaking truth to power, challenging corruption and malfeasance in her native country, the Philippines. But her work tracking disinformation networks seeded by the government, spreading lies to its own citizens laced with anger and hate, made her an enemy of her country’s most powerful man: President Duterte.Hounded by the state and its allies using the legal system to silence her, accused of numerous crimes, and charged with cyberlibel for which she was found guilty, Ressa faces years in prison and thousands in fines. At a time when authoritarian threats to the free press and democracy are growing around the world, Ressa’s cause has been embraced by world leaders, including Hilary Clinton, Madeleine Albright, and Amal Clooney, as well as all who cherish journalistic freedom. How to Stand Up to a Dictator is the story of how democracy dies by a thousand cuts, and how a social media exploded an “atom bomb” online that is killing our freedoms. Ressa maps a network of disinformation—a heinous web of cause and effect—that has netted the globe: from Duterte’s drug wars to America's Capitol Hill; Britain’s Brexit to Russian and Chinese cyber-warfare; Facebook and Silicon Valley to our own clicks and votes.Told from the frontline of this critical digital war—a battle that threatens to engulf America itself—How to Stand Up to a Dictator is an urgent cry for us to recognize and understand the danger before it is too late.

Maria Ressa is CEO, co-founder and President of Rappler, the Philippines’s top digital news site. She grew up in America and studied at Princeton University before working as a journalist in Asia for more than thirty-five years, where she investigated terrorism and established and ran CNN’s Manila and Jakarta bureaus. In addition to the Nobel Prize, Ressa won the UNESCO World Press Freedom Prize in 2021. In 2018, she was a Time magazine Person of the Year, alongside a coterie of other journalists dubbed “The Guardians”—reporters who have been violently attacked or criminal charged to silence the free press worldwide—and was named by Time as one of the most inspiring and influential women of the century. She is the author of Seeds of Terror and From Bin Laden to Facebook. Ressa has endured multiple arrests by the Duterte government for her work, which is the subject of the documentary, A Thousand Cuts. She lives in the Philippines, where she was born.