Home » How to Write One Song 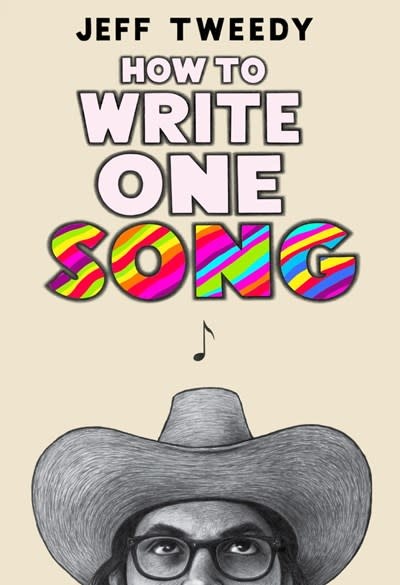 How to Write One Song

Perfect for gifting during the holidays and beyond, a thoughtful, counterintuitive book about creativity from the celebrated songwriter, leader of the band Wilco, and New York Times bestselling author of LET’S GO (SO WE CAN GET BACK), inspiring others by taking the reader through the process of writing one song.

As Jeff Tweedy himself puts it, there are few creative acts more mysterious and magical than writing a song. But what if the goal wasn’t so mysterious, and was actually achievable, and possible, for anyone who wants to add more magic and creativity in their life? That’s something that anyone will be inspired to do after reading Jeff Tweedy’s HOW TO WRITE ONE SONG.

Why one song? Because the difference between one song and many songs isn’t a cute semantic trick—it’s an important distinction that can simplify a notoriously confusing art form. The idea of becoming a capital-S songwriter can seem daunting, but approached as as an isolated, self-contained event, guided by a master practitioner and teacher like Jeff, the mystery and fear subsides, and songwriting becomes an achievable, exciting pursuit.

HOW TO WRITE ONE SONG is literally a step-by-step guide through Jeff’s songwriting process, beginning with his inspiration (or lack of it, at times) and ending with a complete composition. Throughout it all, Jeff shares his reflections on the importance of finding lyrics in unexpected place, thinking about melody in a completely innovative way, and putting the two together to figure out when you’re done.

Overall, HOW TO WRITE ONE SONG illustrates the deep sense of wonder that remains at the heart of this curious, yet incredibly and fulfilling, artistic act, and will be the perfect gift for Jeff Tweedy’s legions of fans.

As the founding member and leader of the American rock band Wilco, and before that the cofounder of the alt-country band Uncle Tupelo, Jeff Tweedy is one of contemporary American music’s most accomplished songwriters, musicians, and performers. Since starting Wilco in 1994, Jeff has written original songs for ten Wilco albums as well as collaborations with Billy Bragg, Mavis Staples, and many others. He lives in Chicago with his family.