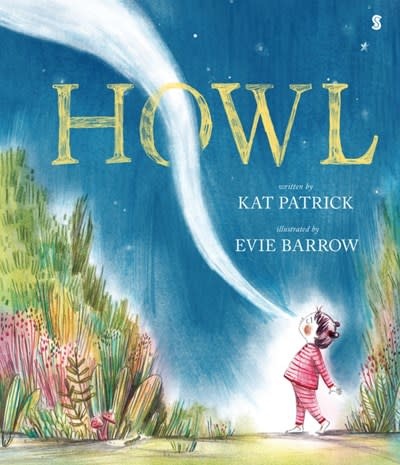 Howl is a masterfully told and exquisitely drawn story of a young girl’s way of expressing and resolving big feelings.

Howl is a masterfully told and exquisitely drawn story of a young girl’s way of expressing and resolving big feelings.Maggie has had a very bad day.First of all, the sun was the wrong shape, in a sky that was too blue. The spaghetti was too long, and her pajamas were the wrong kind of pajama.Then Maggie begins to have wolfish thoughts ...

Kat Patrick recently realized she never actually grew up, and so has been trying to make a living as a writer ever since. Originally from the UK, she has written her way around the world, and after stints in New Zealand, Australia, Iceland, Paris and Patagonia, she is now based in Glasgow.Evie Barrow is an artist and illustrator passionate about artful picture books for both kids and adults. Her hand-drawn style celebrates the textures and imperfections made by hand.When she's done sharpening pencils and untangling thread she enjoys watching Nordic Noir and Wes Anderson movies, reading and walking around the Melbourne neighbourhood where she now lives with her husband and their thirteen year old cat, Millie.