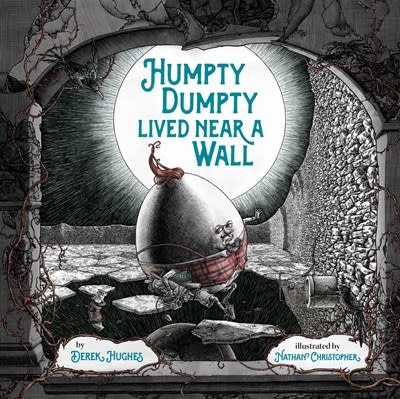 Humpty Dumpty Lived Near a Wall

“This book cracked me up and left a smile on my face (spoiler alert)” - Adam Rubin, #1 New York Times best-selling author of Dragons Love Tacos

Looks like the wall has finally met its match. This classic tale gets a modern twist with a Humpty Dumpty for a new generation.

“Humpty Dumpty lived near a wall…” begins this well-known fable. But this time Humpty is ready for battle, with a secret mission and a touch of mischief. Can all the King’s horses and all the King’s men help put Humpty together again? Or maybe the mission, no matter how small, is simply to question the point of a wall.

The live performances of celebrated conjurer, “Stand Up Magician” Derek Hughes, have been lauded by audiences and critics alike, with the New York Times calling him “thoroughly entertaining.” Hughes has performed his magic on MTV, VH1, Comedy Central, and the CW’s Penn & Teller: Fool Us. He’s a consulting producer on TRUtv’s hit magic series, The Carbonaro Effect, and was a finalist on season 10 of NBC’s America’s Got Talent.

Nathan Christopher is an actor and artist from Minneapolis, Minnesota. As an actor, he has appeared onstage at many theaters around Minneapolis and Saint Paul, as well as a number of venues around the U.S., Europe, and Russia. As an artist, he has won multiple national contests, created original artwork, and designed for businesses, theaters, and individual patrons.