Home » Hunted by the Sky 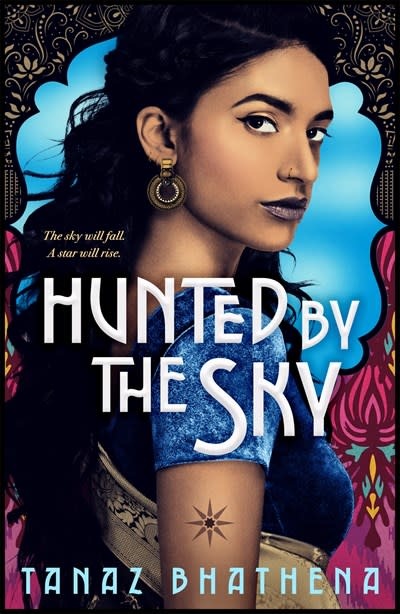 Hunted by the Sky

Set in a world inspired by medieval India, this stunning YA fantasy novel is the first in a new duology from acclaimed author Tanaz Bhathena.

Dangerous circumstances bring them together. . .deadly secrets may tear them apart. Exploring identity, class struggles, and romance, Hunted by the Sky is a gripping adventure set in a world inspired by medieval India.

Gul has a star-shaped birthmark on her arm, and in her kingdom, marked girls are disappearing. Gul’s mark caused her parents’ murder at the hands of the king's army, and forced her into hiding. When a group of rebel women rescue her to train her in warrior magic, Gul only wants one thing: revenge.

Cavas is ready to sign his life over to the king’s army in exchange for money and medicine for his sick father. But when he meets Gul in the capital’s bazaar, their chemistry grows, and he becomes entangled in a mission of vengeance—and discovers magic he never expected.

Tanaz Bhathena is the author of The Beauty of the Moment, as well as the critically-acclaimed A Girl Like That, which received two starred reviews. It was also shortlisted for the Ontario Library Association White Pine Award, a Globe and Mail Top 100 Book, a Quill & Quire Book of the Year, a Chicago Public Library Best of the Best Books for Teens, and a New York Public Library Notable Best Book for Teens. Tanaz lives in Mississauga, Ontario, with her family. tanazbhathena.com