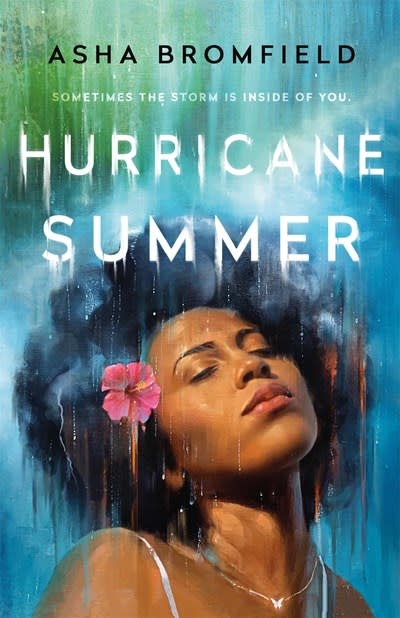 In this sweeping debut, actress Asha Bromfield takes readers to the heart of Jamaica, and into the soul of a girl coming to terms with her family, and herself, set against the backdrop of a hurricane.

Tilla has spent her entire life trying to make her father love her. But every six months, he leaves their family and returns to his true home: the island of Jamaica.

When Tilla’s mother tells her she’ll be spending the summer on the island, Tilla dreads the idea of seeing him again, but longs to discover what life in Jamaica has always held for him.

In an unexpected turn of events, Tilla is forced to face the storm that unravels in her own life as she learns about the dark secrets that lie beyond the veil of paradise—all in the midst of an impending hurricane.

Hurricane Summer is a powerful coming of age story that deals with colorism, classism, young love, the father-daughter dynamic—and what it means to discover your own voice in the center of complete destruction.

Asha Bromfield is an actress, singer, and writer of Afro-Jamaican descent. She is known for her role as Melody Jones, drummer of “Josie and the Pussycats” in CW’s Riverdale. She also stars as Zadie Wells in Netflix’s hit show, Locke and Key. Asha is a proud ambassador for the Dove Self-Esteem Project, and she currently lives in Toronto where she is pursuing a degree in Communications. In her spare time, she loves studying astrology, wearing crystals, burning sage, baking vegan desserts, and taking walks to the park with her dogs Luka and Kyra. Hurricane Summer is her debut novel.