Home » I Am Mozart, Too: The Lost Genius of Maria Anna Mozart 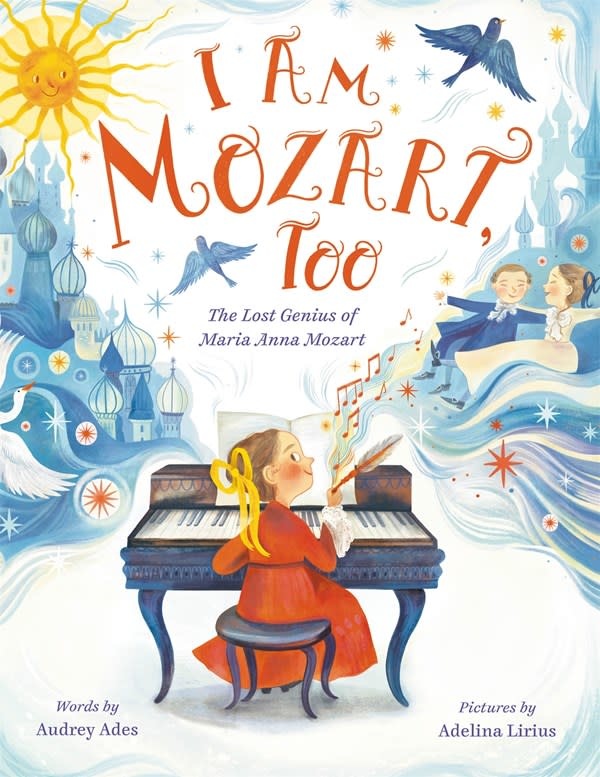 I Am Mozart, Too: The Lost Genius of Maria Anna Mozart

A picture book biography about Wolfgang's older sister, Maria Anna Mozart, who was a child prodigy and a secret composer, perfect for Women's History Month.

To everyone who has heard of my famous younger brother, Wolfgang, but has never heard of me.

Maria Anna "Nannerl" Mozart makes music fit for angels. Songs pour from her like water over the Austrian riverbanks in springtime. When she and her brother play the harpsichord together, she feels confident and carefree.

But everything changes when Wolfgang plays a sonata Nannerl has composed. Papa fumes. Girls are not allowed to compose! Girls belong behind the curtain! Nannerl is pressed into a marriage after she turns eighteen that stifles her song, but her creativity and love for her brother still soars.

With vivid, evocative art by Adelina Lirius, author Audrey Ades tells a powerful story about music, feminism, ambition, and the girl who was and always will be a Mozart.

Audrey Ades grew up in New England and holds degrees in theater and psychology. She is the author of Judah Touro Didn't Want to Be Famous and The Reverend and the Rabbi. She lives in South Florida with her husband, son, and persnickety Pomeranian, Cookie. audreyadesbooks.com

Adelina Lirius is an illustrator based in Stockholm, Sweden. She loves painting imaginary scenes, portraying nature, and depicting the diffferent cultures she grew up with. Adelina is the illustrator of a picture book adaptation of The Secret Garden and The Fort. adelinalirius.com