Home » I Am Smoke 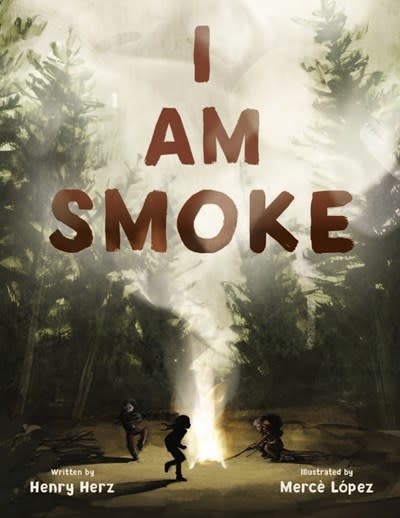 “I Am Smoke is an absolutely beautiful book, where smoke is both poetry and science. Readers will rest, float, and dance along with smoke’s quiet power across time and traditions. I have lingered over its pages more than once, and I’m sure young readers will, too.”- NY Times Bestselling author Doreen CroninSmoke itself acts as narrator, telling us how it has served humankind since prehistoric times in signaling, beekeeping, curing and flavoring food, religious rites, fumigating insects, and myriad other ways.

Smoke speaks in mesmerizing riddles: “I lack a mouth, but I can speak…. I lack hands, but I can push out unwanted guests…. I’m gentler than a feather, but I can cause harm…". This rhythmically powerful narration is complemented by illustrations in which swirling smoke was captured on art paper held over smoky candle flames, and the dancing smoke textures were then deepened and elaborated with watercolors and Photoshop finishes. With this unique method, Merce López “let the smoke decide how the idea I had in mind would dance with it, giving freedom to the images.”The resulting illustrations are astounding, and they resonate with the otherworldly text.

Henry Herz (San Diego, CA) authored ten picture books. His children's short stories have been published in Highlights for Children, Ladybug Magazine, and in anthologies for Albert Whitman & Co. and Blackstone Publishing. Henry also writes adult science fiction and fantasy short stories. He holds a BS in Engineering from Cornell, an MS in Engineering from George Washington University, and an MA in Political Science from Georgetown.Merce López (Barcelona, Spain) graduated from Llotja Art School in Barcelona and has illustrated for design, theater, and film as well as twenty children's books for Spanish and international book publishers. Her 2019 title Lion of the Sky: Haiku for All Seasons by Laura Purdie Salas received multiple starred reviews and was named a Center for Children's Books Gryphon Honor Book, an NCTE Notable Poetry Book, a Kirkus Best Picture Book, and a Parents Magazine Best Kids' Book, among other accolades.