Home » I Don't Want to Wash My Hands! 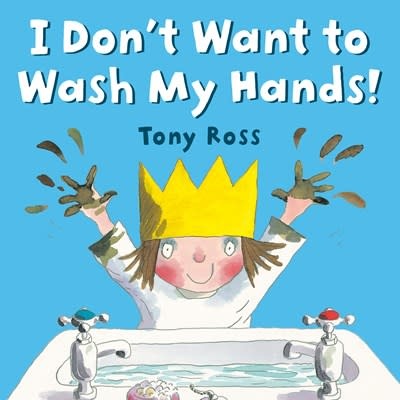 I Don't Want to Wash My Hands!

From beloved children’s author and illustrator Tony Ross, comes a fun to read and humorous take on the importance of handwashing.

The Little Princess does not want to wash her hands. After all, she’s already washed her hands so many times!

Well, because of germs and nasties, she’s told, which are too small to even see! But if they get inside your body, they can make you ill. Not even a Princess wants to be in bed all day!

Now the Little Princess knows just what to do! She’s got just one more question…“Have you washed your hands?”

Tony Ross has been illustrating books for over 40 years, and has been published all over the world. In Britain he is best known for writing and illustrating his Little Princess books and for illustrating the Horrid Henry series by Francesca Simon, both of which have become TV series based on his artwork. He also illustrates the works of David Walliams and has also illustrated the Amber Brown series by Paula Danziger, the Dr. Xargle series by Jeanne Willis, and the Harry The Poisonous Centipede series by Lynne Reid Banks. He lives in Macclesfield.