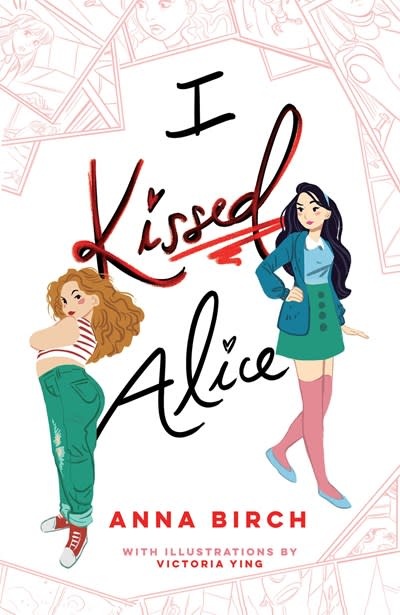 An #OwnVoices queer YA romance about two rivals who fall in love online.

Rhodes and Iliana couldn't be more different, but that's not why they hate each other.

Rhodes, a gifted artist, has always excelled at Alabama’s Conservatory of the Arts (until she’s hit with a secret bout of creator’s block), while Iliana, a transfer student, tries to outshine everyone with her intense, competitive work ethic. Since only one of them can get the coveted Capstone scholarship, the competition between them is fierce.

They both escape the pressure on a fanfic site where they are unknowingly collaborating on a webcomic. And despite being worst enemies in real life, their anonymous online identities I-Kissed-Alice and Curious-in-Cheshire are starting to like each other... a lot. When the truth comes out, will they destroy each other's future?

Anna Birch was born'n'raised in a rural area on the outskirts of Birmingham, Alabama. She traded thick forests and dirt roads for the heart of the city, where she lives now with her husband, three children, and dog. She loves knitting, brie, and hanging out with her family. I Kissed Alice is her debut novel.

Victoria Ying is an author and artist living in Los Angeles. She started her career in the arts by falling in love with comic books, which eventually turned into a career working in animation and graphic novels. Her film credits include Frozen, Moana, Tangled, Wreck-It Ralph, Big Hero 6, and Paperman. She is the illustrator of the DC Comics graphic novel Diana: Princess of the Amazons and the author and illustrator of her original graphic novel City of Secrets.