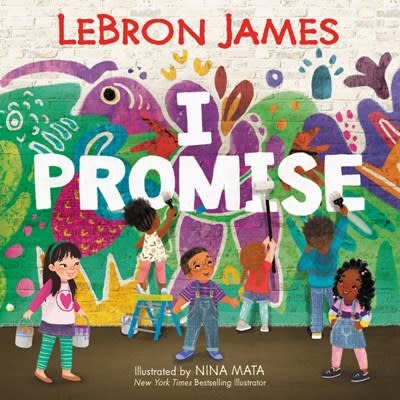 I Promise is the slam-dunk motivational picture book written by NBA champion LeBron James which is inspired by the values and initiatives of his I PROMISE school in Akron, Ohio. A perfect keepsake for tiny go-getters, dreamers, and doers!

NBA superstar and cultural icon, LeBron James, makes his children’s book debut with a knockout picture book that encourages kids to be their biggest motivators and to be their best selves! Each promise is one that will help kids grow into successful, compassionate, and kind adults who strive to make their dreams come true. Written in fun rhyming verse that captures James’s inspirational voice and illustrated by the New York Times bestselling artist Nina Mata, this picture book makes a special gift for all occasions.Includes the original I PROMISE pledge and a letter from LeBron.

LeBron James is widely considered to be the best basketball player in the world and one of the greatest players of all time. James has won three NBA championships, two Olympic gold medals, and four league MVP titles. In 2017, Time magazine listed him as one of the 100 most influential people in the world. James grew up in Akron, Ohio, where he continues to create generational change through his LeBron James Family Foundation that focuses its efforts on helping youth achieve a better future through education. In 2018, his foundation opened the I PROMISE School, designed to help underprivileged students and their entire families succeed in school and beyond. Nina Mata is a New York Times bestselling illustrator and received her degree from the Fashion Institute of Technology in New York City. She has illustrated many books, including American gymnast Laurie Hernandez’s She’s Got This and the Ty’s Travels I Can Read series, and she previously worked for Sesame Street. She currently lives in New Jersey with her husband, their daughter, and Tabitha, their cat. Visit Nina online at www.beautifique.org.